An Uber driver has pleaded guilty to wagering on allegedly fixed international tennis matches, reaping $18,600 for his part in a scheme suspected of corrupting two tournaments in Brazil and Egypt in 2018.

Rajesh Kumar was fined $2500 and received a two-year good behaviour undertaking with no conviction in Melbourne Magistrates Court on Tuesday for three counts of "recklessly" using corrupt information for betting purposes. 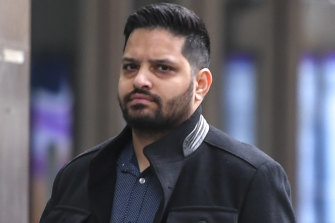 The 32-year-old is the second person to plead guilty over their involvement in placing bets on matches that were allegedly corrupted by a syndicate operating out of India.

Kumar and an associate, Harsimrat Singh, were arrested in Melbourne in 2018 by Victoria Police’s Sporting Integrity Intelligence Unit as part of an investigation that also involves the sport’s anti-corruption body, the UK-based Tennis Integrity Unit (TIU).

In early October, Singh received a similar sentence for placing wagers worth $1199.

Magistrate Hayley Bate said it was clear both men had received information that they used to place bets for profit. 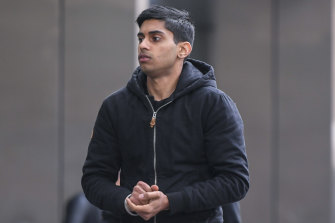 Harsimrat Singh outside the County Court in June this year.Credit:Eddie Jim

"While I accept neither are to be sentenced as having actual knowledge or having any direct link to the actual corruption of the matches, the offending is still extremely serious," she said.

The court has heard the alleged ringleader of the syndicate is India-based cricket and tennis promoter Ravinder Dandiwal, who is Singh’s cousin. He was arrested by Indian police in July this year over separate sports corruption allegations.

The Age does not suggest any of the players did anything inappropriate or illegal, either individually or collectively; only that they are named by police as participating in matches under investigation.

Barrister David Mence said his client was a man of "limited means" who had been driving an Uber to make ends meet at the time of the offending in 2018, after he was injured and could no longer work in the logistics industry.

In the hierarchy of offenders involved in the scheme, Kumar was "only peripheral" and he had "outstanding prospects for rehabilitation", he said.

"Despite there being more going on in the background that the Tennis Integrity Unit has been looking into, that doesn’t fall at the feet of my client," he said.

"To a certain extent this has all come as a great surprise to him. The way in which this offence works is that you can be guilty purely on the basis of recklessness and I think that Mr Kumar was, to a certain extent, quite bewildered when he was first arrested because there wasn’t really a basis for him to know that what he was doing was betting on the basis of actual corruption."

But Ms Bate said Kumar had opened a gambling account, had direct contact with the architect of the scheme, and used information he provided to place bets.

"I have also heard context evidence in relation to six separate attempts, which had they been successful would have earned him in excess of a quarter of a million dollars," she said.

Court documents show Kumar had attempted to place a $25,000 bet on a doubles game, with Laranja and Lindell to win the first set but Silva and Turini to win the match. The potential pay-off was $168,000. But online gaming service Crownbet rejected the wager, allowing Kumar to bet only $14.80 for winnings of $100.

"It’s not done on an occasion, it’s done on multiple occasions. It’s not something on the face of it that should be bewildering to a person out laying $2000 on a bet when they are of limited means," prosecutor Bruce Nibbs said.