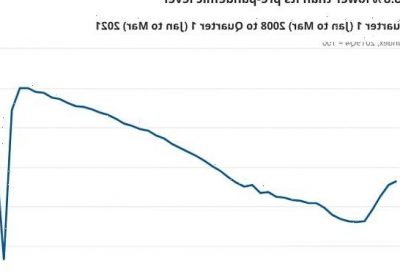 UK economy shrank by 1.6 per cent in the first quarter of 2021 – more than previously thought – as lockdown restrictions hit hard but household savings surged to record levels

The UK economy contracted by more than was first thought in the first quarter of 2021 as coronavirus lockdown restrictions hit hard.

Data published by the Office for National Statistics showed that UK gross domestic product (GDP) is estimated to have decreased by 1.6 per cent in the period between January and March.

That is up slightly on the original estimate of a 1.5 per cent reduction.

It means that the level of GDP now stands at 8.8 per cent below where it was in the fourth quarter of 2019 before the coronavirus pandemic hit, revised from an initial estimate of 8.7 per cent.

Despite the economic dip in the first three months of 2021, household saving levels again returned to record highs. 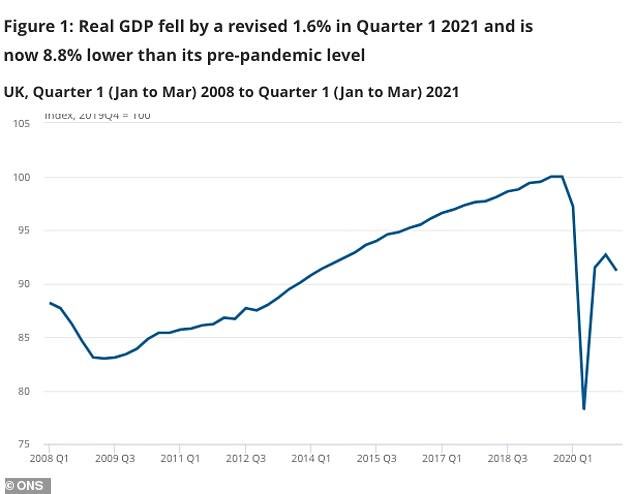 Data published by the Office for National Statistics showed that UK gross domestic product (GDP) is estimated to have decreased by 1.6 per cent between January and March

The household saving ratio – the estimate of the amount of money that households can put away – increased to 19.9 per cent in the first quarter.

That is the second highest ratio ever recorded and compares with 16.1 per cent in the final three months of 2020.

The highest saving ratio of 25.9 per cent was recorded in the second quarter of 2020 as the nation went through its first lockdown.

The ONS said that household spending fell in the first quarter of this year as lockdown prevented families from spending money in restaurants and non-essential shops.

Spending in restaurants and hotels dipped by 37.2 per cent on the previous quarter.

The ONS said that the dip in GDP was largely driven by contractions in the education, wholesale and retail sectors caused by the tightening of coronavirus curbs.

The closure of schools and the return of pupils learning at home hit the economy particularly hard. 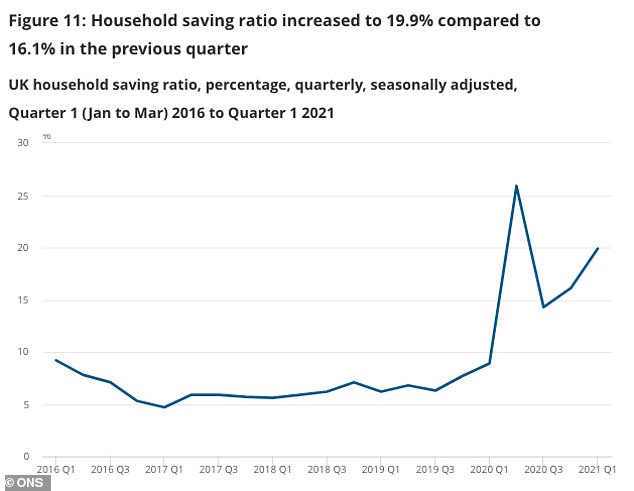 The household saving ratio – the estimate of the amount of money that households can put away – increased to 19.9 per cent in the first quarter

Eduction output shrank by 14.7 per cent in the first quarter of 2021 which ‘reflects the relatively low level of school attendance in January and February because of the closure of schools as part of the government response to the coronavirus pandemic’.

Jonathan Athow, deputy national statistician at the ONS, said: ‘Today’s updated GDP (gross domestic product) figures show the same picture as our earlier estimate with schools, hospitality and retail all hit by the re-imposition of the lockdown in January and February, with some recovery in March.