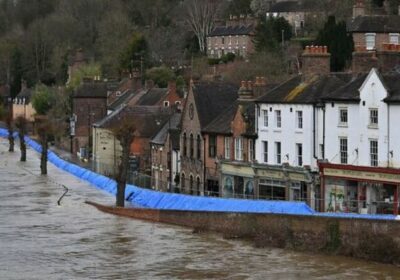 The Environment Agency has warned people in Bridlington on the North Sea coast of Yorkshire of possible flooding. The flood alert will be in force from Tuesday April 12 between 4am and 6am due to onshore winds and wind-blown spray.

Wind gusts of up to 76 kilometres per hour have been forecasted for the region by weather mapper WXCHARTS.

The Environment Agency noted that the Lifeboat Station area in Bridlington is of particular concern.

Specific caution has been issued for those around exposed promenades and roads where spray may create hazardous conditions.

BBC weather forecaster Helen Willetts noted that there will also be a risk of thunder on Tuesday before the rain and cloud gradually moves away into the south.

Wednesday is set to be dull and wet as rain pushes northward across the UK with heavy rain and thunder in places as temperatures become milder as the winds ease off.

Temperatures for the south of Britain are set to be averaging around 14C to 16C with possible highs of 17C in some places by Wednesday.

For northern areas the weather will be dry, with temperatures also moving into double digits between 11C and 14C.

Across the end of the week, temperatures will slowly increase for a sunny bank holiday Easter weekend.

Areas in the southeast are set to see highs of 18C on Good Friday with temperatures in Scotland such as Inverness also being predicted to see between 15C and 17C.

This will be followed by a mild night of average temperatures between 10C and 11C.

Temperatures for the rest of the weekend are due to remain warm as warm tropical air and high pressure settles over the UK.

According to BBC Meteorologist Louise Lear, the warm temperatures are “coming up from the Sahara”.

DON’T MISS:
POLL:Do you think Macron or Le Pen would be better for Brexit Britain? (POLL)
Gardeners can get rid of pests with cupboard essentials (REVEAL)
Max Verstappen compares F1 safety car to a ‘turtle’ (COMMENT)

She added: “It’s going to be pushing its way steadily up north” and noted that 19C or 20C is “not out of the question” going into the weekend.

It looks as though the warmer weather is set to continue and settle into full-fledged spring as we move closer to the summer months.

Those with hay fever allergies have been warned of the high pollen count which is expected to come with the warmer temperatures.

British Weather Services meteorologist Jim Dale said: “It is fair to say that the week to come is not going to be a bad one.”