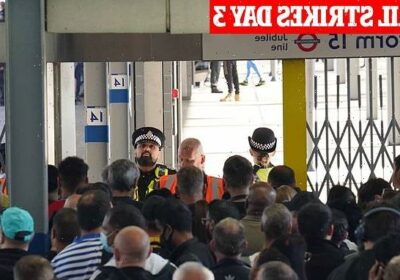 Train strike news LIVE: Only 20% of UK trains will run today from 7.30am on third day of chaos as RMT industrial action restarts – and London Underground faces more disruption

Follow live updates from MailOnline here as the Rail, Maritime and Transport union go back on strike at Network Rail and 13 train operators across Britain today:

Millions of commuters face a third day of chaos across Britain today during the biggest rail strike in 30 years – as talks between the RMT union and railway bosses failed to resolve a bitter row over pay, jobs and conditions. Here is the full story on MailOnline this morning:

While rail workers go on strike, trains have been left waiting in sidings – including near Peterborough station – on the second day of the nationwide rail strike. 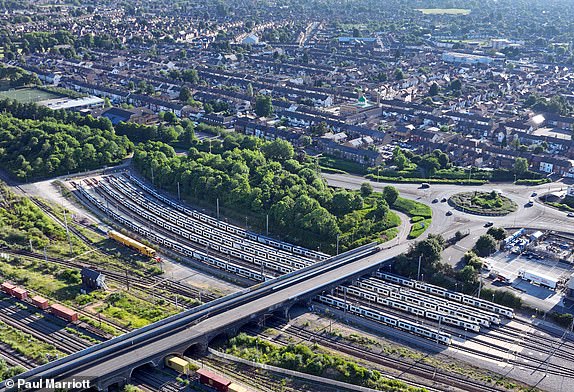 Network Rail has warned that it is currently experiencing delays into London Liverpool Street on Greater Anglia and Elizabeth line services expected to run because of vandalism at Bethnal Green junction. It added: ‘We’re working to get the obstruction removed as soon as possible.’

RMT general secretary Mick Lynch is back on our television screens this morning, appearing on ITV’s Good Morning Britain.

It comes after he accused Transport Secretary Grant Shapps of ‘wrecking’ negotiations by ‘not allowing Network Rail to withdraw their letter threatening redundancy for 2,900 of our members’.

Mr Shapps hit back, saying the RMT claim was a ‘lie’. 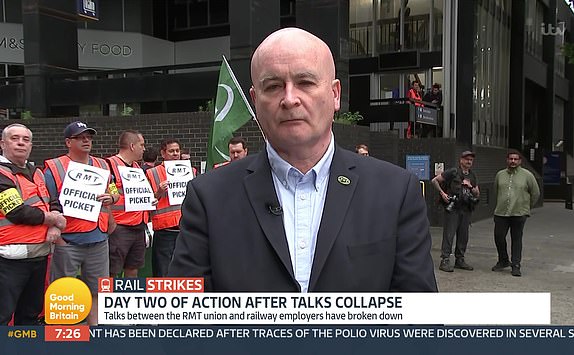 While queues for buses are unlikely to be quite as big today due to the lack of a Tube strike, there were still people waiting near Marble Arch this morning. 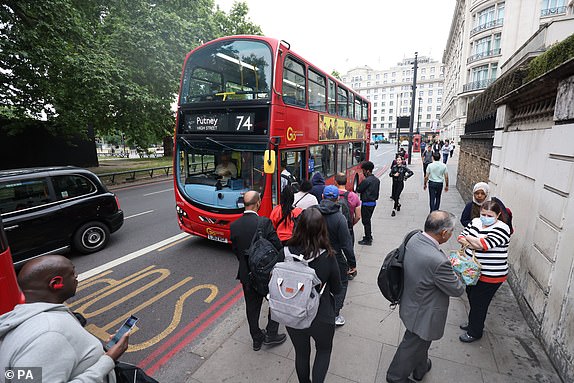 ‘With passenger numbers still at only 80% of pre-pandemic levels the industry remains committed to giving a fair deal on pay while taking no more than its fair share from taxpayers.

‘We can only achieve that by making improvements – like offering better services on a Sunday – that reflect the changing needs of passengers so we can attract more back.

‘We call on the RMT leadership to continue to talk so that we can secure a thriving long-term future for the railway and its workforce.

‘Our advice to passengers remains the same – only travel by rail if absolutely necessary, check before you travel, and make sure you know the time of your first and last trains.’

‘We are disappointed that the RMT have again chosen to walk away from negotiations without agreeing a deal. We remain available for talks – day or night – and will do everything we can to avoid further disruption for our passengers.

‘As a result of this needless and premature strike, rail services will look much like they did on Tuesday – starting later in the morning and finishing much earlier in the evening (around 6.30pm).

‘We are asking passengers to please check before you travel, be conscious of when your last available train is departing, and only travel by train if necessary.’

Greater Anglia services will be even worse hit today, because members of the drivers’ union Aslef on Greater Anglia are striking in a separate dispute over pay.

The company, which is also affected by the RMT strike, advised passengers to travel only if it is necessary. It said there will be ‘little to no service’.

The Government has announced plans to change the law to enable businesses to supply skilled agency workers to plug staffing gaps during industrial action.

Ministers pointed out that, under current trade union laws, employment businesses are restricted from supplying temporary agency workers to cover for strikers, saying it can have a ‘disproportionate impact’.

The Government said the legislation will repeal the ‘burdensome’ legal restrictions, giving companies affected by strike action the freedom to tap into the services of employment businesses which can provide skilled, temporary agency staff at short notice.

Network Rail has welcomed the move but Labour and the unions condemned it as a ‘recipe for disaster’.

London Liverpool Street is another mainline station looking empty this morning. Elizabeth line services travelling between Abbey Wood and Paddington have been running since 6.30am, and there are also some early Overground trains. 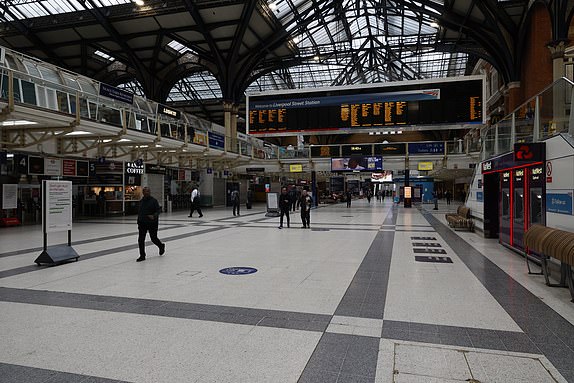 The strikes involve a row over pay, jobs and conditions. The RMT wants pay rises for workers that recognise the RPI rate of inflation, which is currently 11.1 per cent, and a guarantee of no compulsory redundancies.

The union has claimed that Network Rail plans to cut jobs and reduce spending – with an impact on safety. It says that it is striking ‘due to the inability of the rail employers to come to a negotiated settlement with RMT’.

The RMT claims Network Rail and train operators have ‘subjected their staff to multi-year pay freezes and plan to cut thousands of jobs’, while also accusing the Government of ‘abjectly failing in their responsibilities’.

But Network Rail and the Government say the union is unwilling to modernise work practices. Despite a pay freeze in 2021 – during the height of the pandemic – Network Rail has offered a rise of at least 2 per cent for 2022.

Three operators say they will have no service today: Gatwick Express, Caledonian Sleeper and Merseyrail

And in London, there is a reduced service on the Overground and Elizabeth line, while most Underground lines are running normally but there are part-suspensions on the Bakerloo and District lines.

Only around half of the network will be open today and for just an 11-hour period between 7.30am and 6.30pm

Almost all stations across Scotland and Wales are completely cut off, while there are also no services to the likes of Penzance in Cornwall, Bournemouth in Dorset, Chester in Cheshire and Blackpool in Lancashire.

There are also no passenger trains running north from Glasgow or Edinburgh , and the number of services today is expected to be limited to around 4,500 compared with 20,000 normally.

Here is a map from Network Rail which shows what lines will run today: 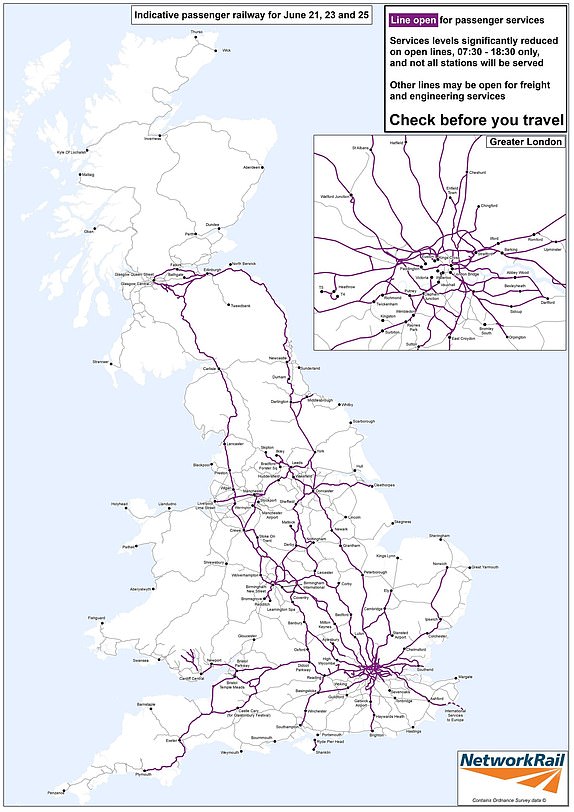 Southeastern has urged passengers ‘please do not travel today’ due to the strike action.

Only 35 out of its 180 stations will be open, and no rail replacement buses will serve stations which are closed.

Southeastern said passengers may be unable to board trains at stations where a limited service is running, especially at locations such as Ashford and Ebbsfleet.

The only services running today will be on the Dartford lines, High Speed via Ashford and Orpington line – and these will only be between 7.30am and 6.30pm. 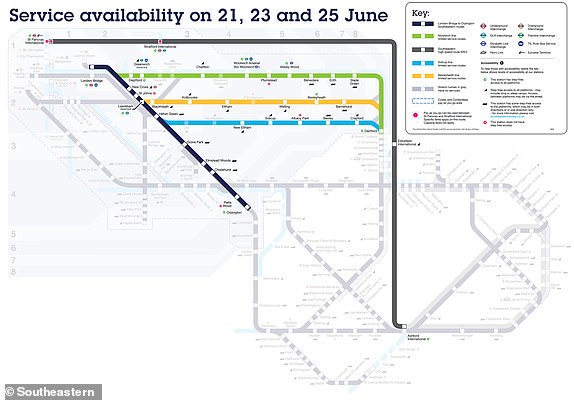 c2c – which runs trains between Essex and London Fenchurch Street – has asked passengers travelling from Upminster, Barking, West Ham or Limehouse during today’s rail strike to use Transport for London services. 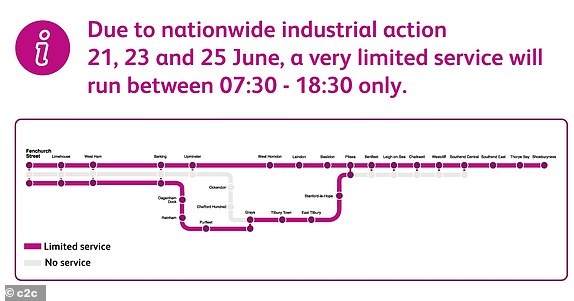 There will be a reduced service on the London Overground today, due to the national rail strike and its impacts on shared track and assets.

Transport for London warned that services will run between 7.30am and 6pm but are ‘expected to be very busy and may not be able to stop at all stations’.

On the Overground line between Romford and Upminster in Zone 6, there will be no service at all today due to the national rail strike.

The central section of the Elizabeth line between Paddington and Abbey Wood in South East London will be running a reduced service today – but opened as normal at 6.30am and will close as normal at 11pm.

However the west (Paddington to Reading and Heathrow) and east (Liverpool Street to Shenfield) branches of the Elizabeth line will run a reduced service from around 7.30am, with customers advised to complete all journeys by 4pm.

Traffic is already building up before the morning rush-hour begins, with commuters forced into their cars and huge queues seen on the A102M Blackwall Tunnel approach at Greenwich in South East London this morning. 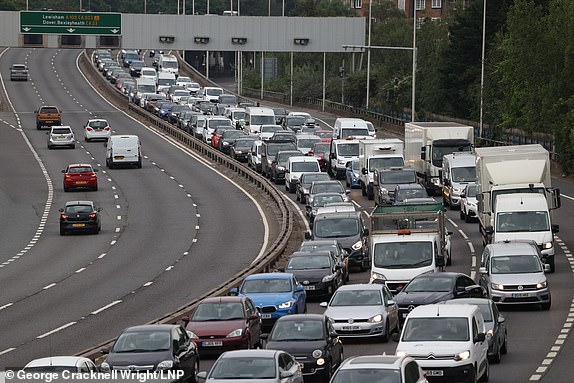 The normally-bustling London King’s Cross station looks completely empty this morning, with the first train due to be a Thameslink service for Ely at 7.28am. Other early services include a 7.30am Hull Trains service to Doncaster, a 7.32am Thameslink train to Cambridge and a 7.33am LNER train to Edinburgh. 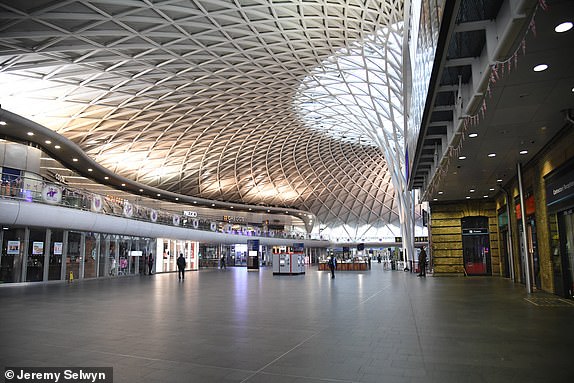 There is no strike on the London Underground today – that was only on Tuesday – but there will still be lots of disruption on the network today due to the national rail strike.

Here are the problems on Tube lines this morning as people embark on their morning commute:
Bakerloo: No service between Queen’s Park and Harrow & Wealdstone (due to Network Rail strike)
Circle: Minor delays (due to train cancellations)
District: No service between Turnham Green and Richmond and between Parsons Green and Wimbledon (due to Network Rail strike)
Hammersmith & City: Minor delays (due to train cancellations)
Piccadilly: Severe delays between Hammersmith and Heathrow terminals and between Acton Town and Uxbridge (due to an earlier track fault at Chiswick Park)

Good morning and welcome to MailOnline’s liveblog on the third day of disruption due to the rail strikes in Britain.

Thousands of railway workers are staging their second strike of the week today after talks failed to resolve a bitter row over pay, jobs and conditions.

Members of the Rail, Maritime and Transport union (RMT) at Network Rail and 13 train operators are taking industrial action, crippling services across the UK.

Only around one in five trains will run and mainly on main lines during the day. The strike began on Tuesday, and there was also major disruption yesterday despite it not being an official day of walkouts.

Stay with us throughout today for updates on how the strike affects services.