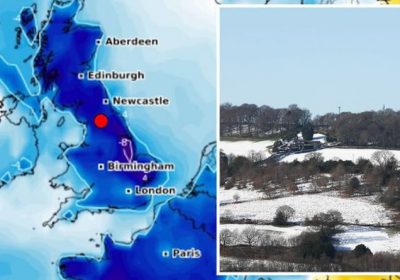 London: Snow falls in Kingston as restrictions are eased

Britons woke up to a freezing start this morning, with temperatures dropping to lows of -5C in parts of the country. Much of the UK has also seen flurries of snow, with wintry showers recorded across London, Shropshire, the Midlands and parts of the south coast. Scotland recorded its coldest April night since 2013 last night, as temperatures dropped to -9.4C at Tulloch Bridge in the Highlands. Last week England also saw its coldest April day in eight years on Wednesday, with the mercury hitting a freezing -7.5C in Benson, South Oxfordshire.

Weather maps by WXCharts show the whole of the UK turn a dark blue this morning, as the cold temperatures take hold.

The dark colouring shows the mercury is not expected to rise above freezing, and could drop to as low as -8C.

By midday temperatures are set to warm only slightly, to highs of 2C.

Temperature charts by Netweather show the mercury plunged to -5C in Scotland at 6am this morning, with lows of -3C forecast in south England.

By 3pm this afternoon, highs of 8C are forecast. 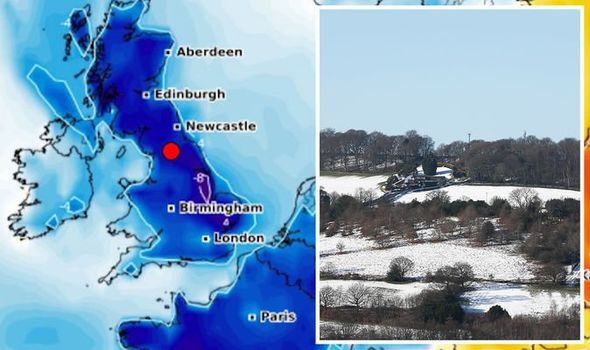 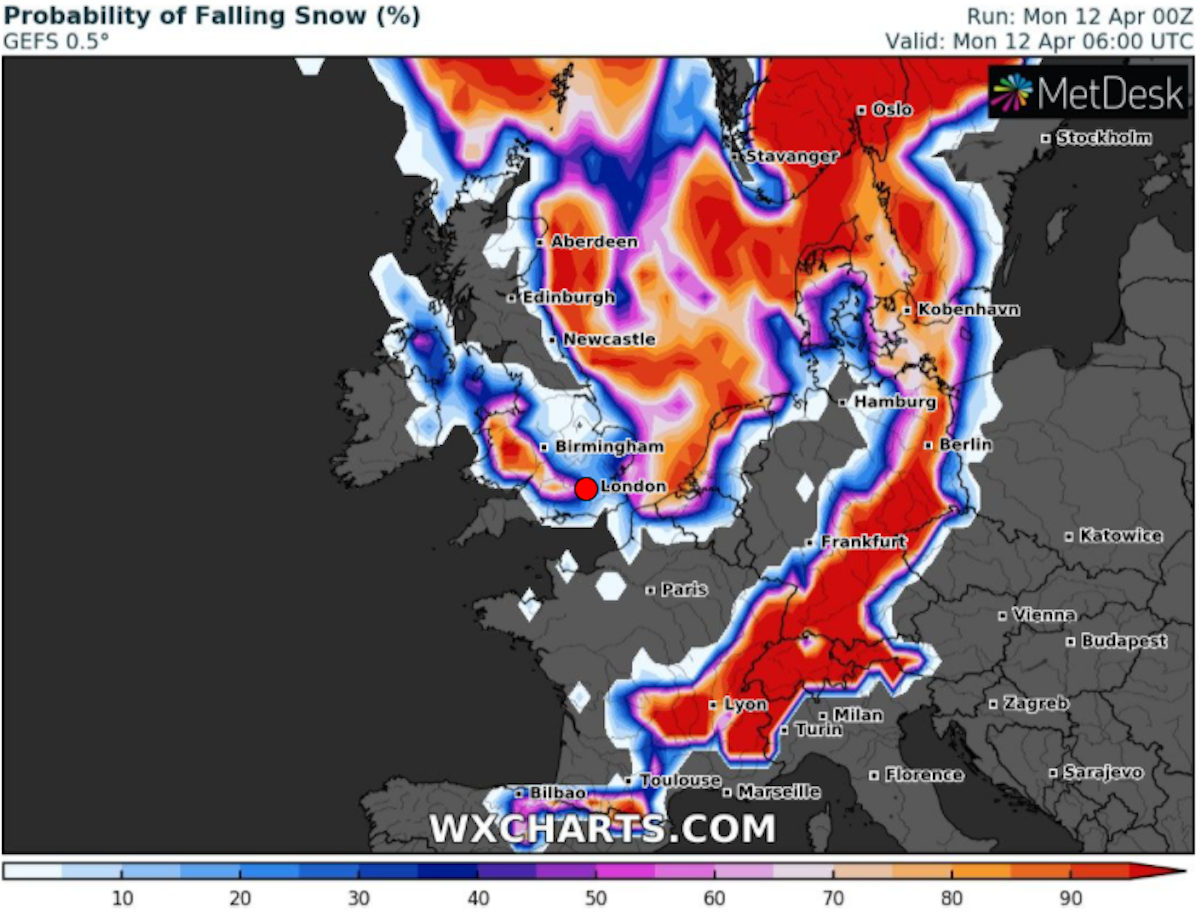 The cold snap brought snow this morning, with Britons across the country taking to social media to report the wintry showers.

People were quick to share videos of the snow falling, in places such as London, Brighton, Oxfordshire and Surrey.

Meteorologist Luke Miall said in yesterday’s outlook: “We will see some wet weather pushing into Northern Ireland that will spread into Wales through the small hours and there will be some hill snow within this. 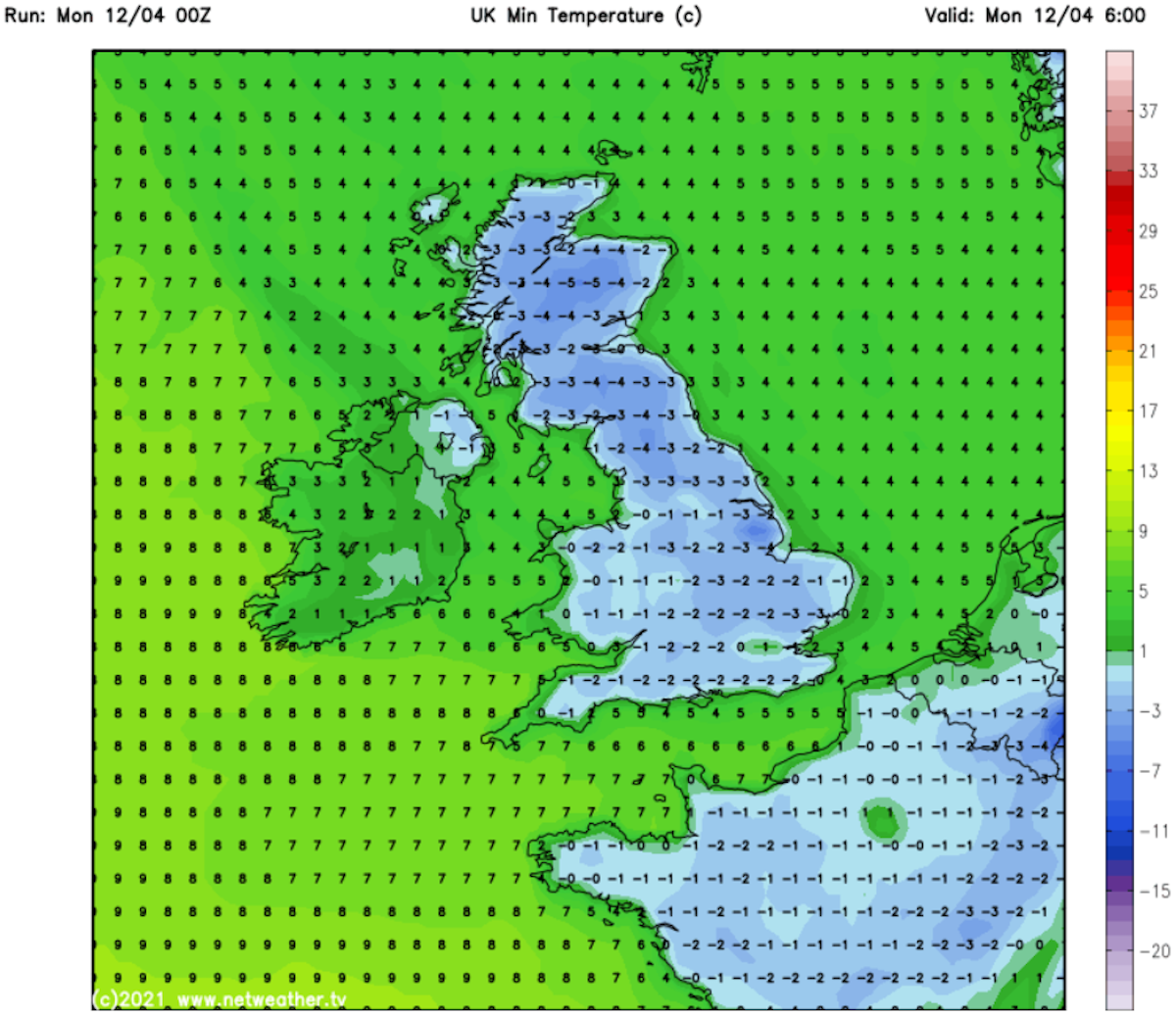 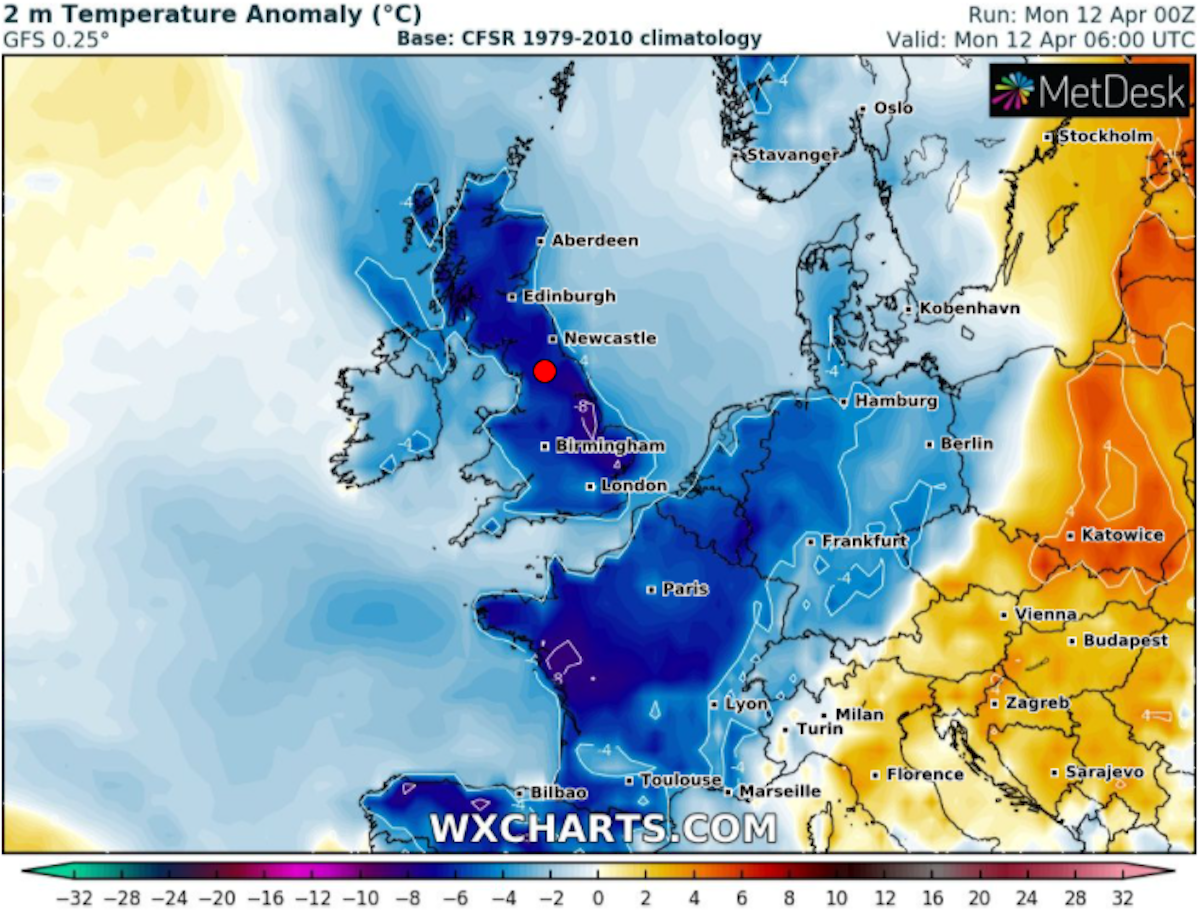 “That itself will work its way into the Midlands and south west England as we go through Monday morning.

Eventually getting into parts of south England, mostly falling as rain with perhaps a little bit of sleet or wet snow up over higher ground.

“Another cold day to come for all.”

The chilly mornings are set to last throughout the week, with lows of -3C forecast in parts of the UK all week.

Maidenhead: Snow falls in the area as lockdown is eased 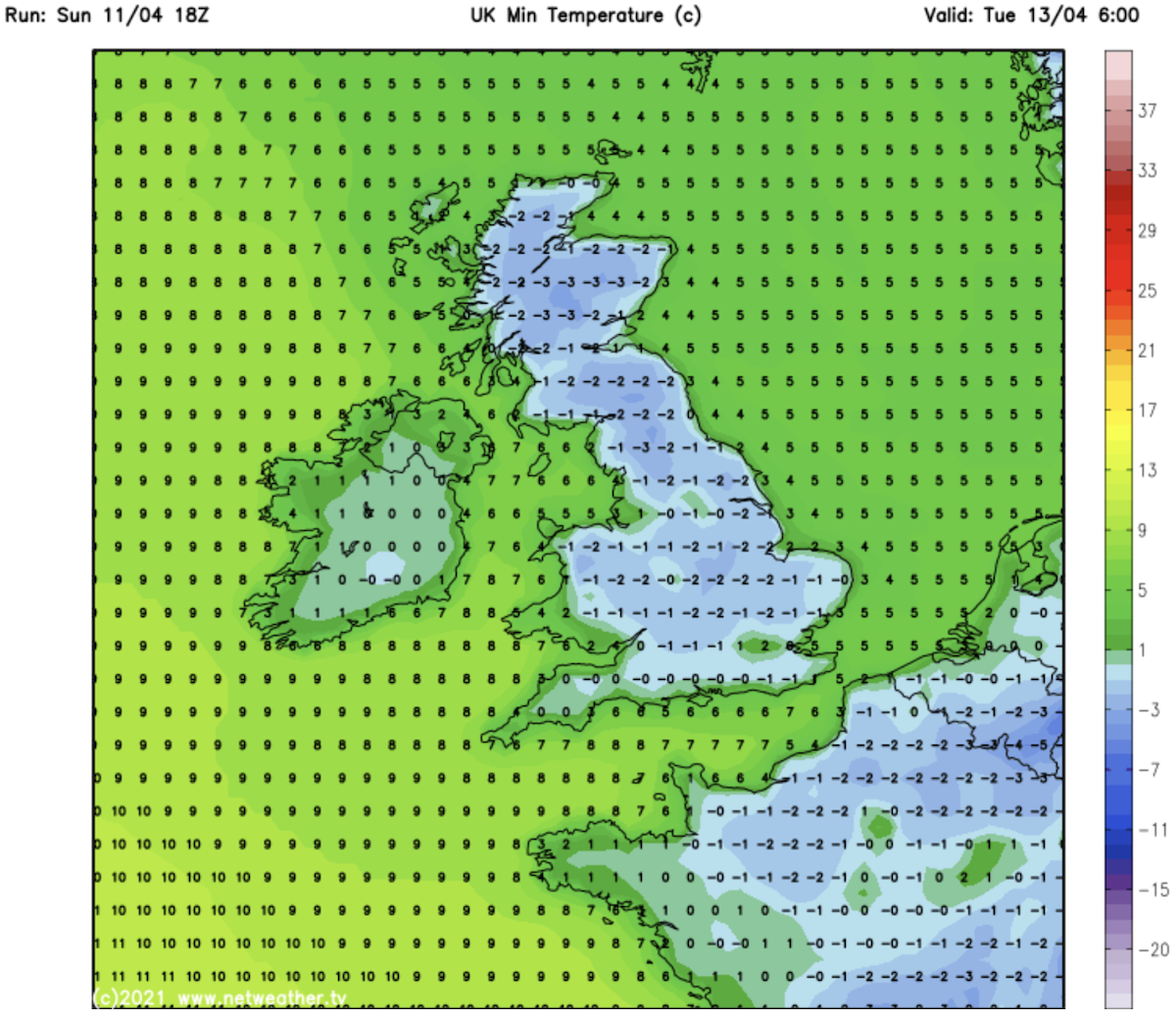 Temperature charts show much of the UK turn an icy white every morning, indicating freezing temperatures, in the early hours of the morning and until 9am.

But the mercury is expected to warm throughout the day, with temperatures expected to reach the low teens most days.

BBC forecasters said from Monday: “High pressure will then move across the country for the start of next week.

“This will keep things cold for a few days, but also bring dry weather for many. 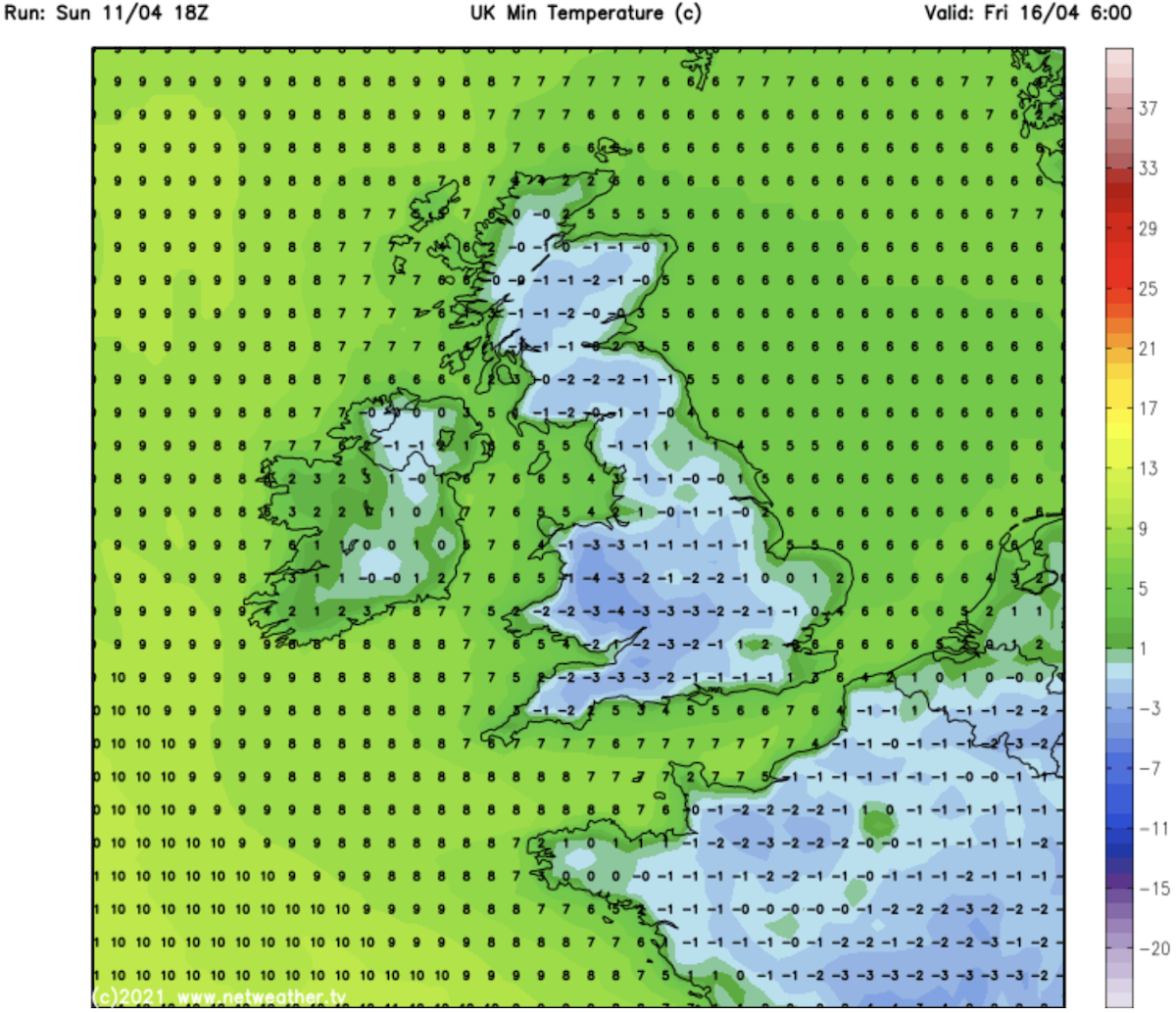 “Scotland and Northern Ireland are the main exceptions here with some patchy rain and hill snow for western areas.

“A few showers are possible in western England and perhaps North Wales too.

“By Thursday high pressure will begin to shift into Scandinavia, causing our winds to shift to more southerly by Friday.

“This will moderate things from our cold start to April, finally bringing the temperatures back to near normal.”