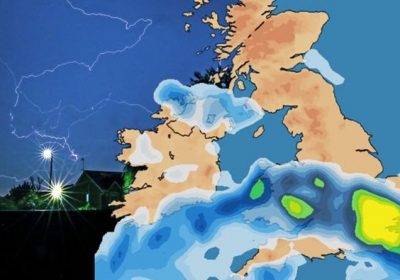 Several days of glorious sunshine could make way for “heavy showers and thunderstorms over east and southeast England”, the Met Office said. It said that today will see a “good deal of cloud affecting coastal districts in the north”.

Other areas will have a good deal of sunshine as things turn hot again across central, southern and western parts.

But as the day wears on there is a “risk of thunderstorms developing over eastern areas of England later”, it said.

The forecaster went on to warn that the torrid weather could hit east and southeast England tonight.

Thankfully it does not look set to last and tomorrow will be “another dry and sunny day for many areas”, it said.

However it warned that “the high temperatures may trigger isolated heavy showers in the afternoon”.

Moving later into the week, the heat is set to remain in the west on Thursday before “turning more unsettled from the south as rain, perhaps thundery, moves north Friday night into Saturday”.

Conditions will remain “drier and brighter in the northwest”, it predicted.

The news emerged as the Met Office yesterday issued its first-ever extreme heat warning as the mercury topped 30C (86F) across swathes of the country.

However yesterday’s milestone was the very first time the Met Office implemented a severe weather warning for the heat.

The heat warning is due to be in place across south Wales, west Midlands, southwest England and further east into Hampshire.

The Isle of Wight is also expected to be impacted.

It read: “The current hot weather is expected to continue until later this week.

“High temperatures are expected both by day and by night, peaking Thursday before temperatures fall on Friday.”

The extreme heat warning is in force from 4.05pm on Monday until 11.59pm on Thursday.

BBC Breakfast’s Carol Kirkwood also said that the UK can expect the weather to remain extremely hot with some areas seeing temperatures getting even hotter as the week progresses.

Speaking to BBC Breakfast, Ms Kirkwood revealed the hottest day of the year was recorded on Sunday at 31.6C (89F) at Heathrow.

She explained much of the hot weather will stay for the rest of the week, including stuffy and warm nights.

She said: “It’s also been quite uncomfortable for sleeping in, temperatures currently in the Isle of Wight 21C (69.8F) and 20C (68F) in London.

“The forecast for today once again, it’s a hot sunny one for the bulk of the UK and we could say that for much of this week.

“There is the chance that we could catch the odd isolated thunderstorm which could be quite heavy.

“Later in the (Monday) afternoon into the early evening period but most of us will miss them.”