Yellow warnings are in force for the south coast of England in the morning, with the day’s most brutal downpour expected to last until about 10am from Portsmouth to Whitstable and also hitting South London. Spells of heavy rain will also strike the northeast of England and the southern regions of Scotland, with Wales seeing gentler downpours moving into the afternoon. Low pressure of the UK is to blame for the chaotic weather, with the week ahead bringing the same breezes and rainfall for Britain.

The Met Office’s Sunday forecast held that the south of England might even suffer thunderstorms due to the chaotic conditions of Sunday.

They said: “A heavy band of rain will move its way from west to east then lingering across Scotland overnight (…)

“There will be some heavy rains returning on Sunday morning. That includes a heavy band of rain across the south east of England on Sunday morning, it will create some tricky travelling conditions with a lot of water on the roads so there is a yellow warning in force for the first few hours of the day.

“Elsewhere will see some sunny spells for a time but quickly the heavy showers will spread across the country by Sunday afternoon.” 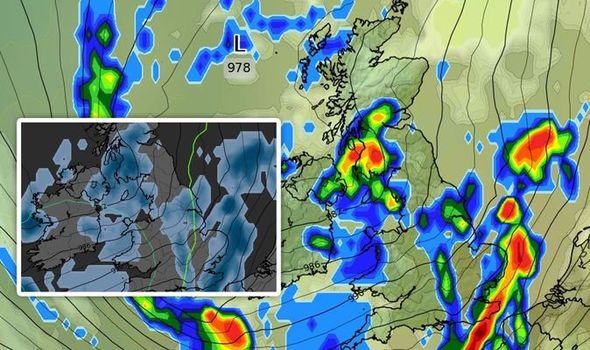 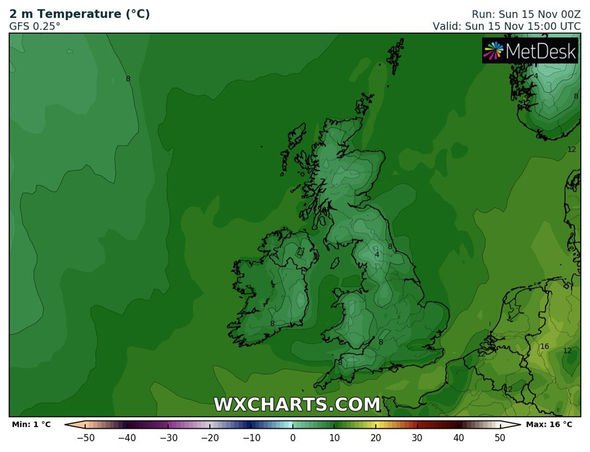 As the morning rolls in the south coast will begin experiencing heavy downpours at around 5am, with up to 16mm of rain an hour hitting the region.

That poor weather is set to intensify in the southeast by 7am, with the heavier rains moving in from Europe towards Brighton.

By 9am the weather front will have spread across the southwest, and slightly eased with rain as heavy as 4mm an hour pushing eastwards.

The northeast will also experience 8mm of rainfall an hour, before it begins moving eastwards around Merseyside as well as the central Scottish belt. 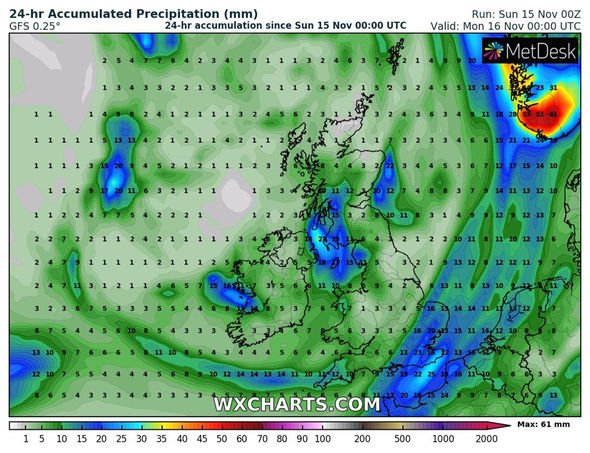 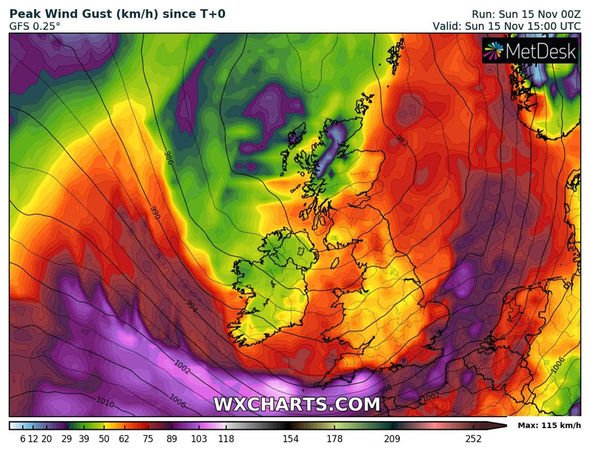 By midday the southeast will see mostly cloudy skies as the rain pushes away, while the southwest and Wales start to see intermittent spells of up to 4mm an hour.

Temperatures for the day are set to be standard for November, with midday bringing an average of 9C (48.2F) across England and Wales.

Northwest Scotland will be the coldest part of the UK today, with an average of 7C (44.6F), as it battles a miniature rain front localised around Dumfries and Glasgow.

Northern Ireland will also soak with Scotland in the afternoon, until the rains ease up in the regions by around 3pm as they push into the midlands.

Sunday evening will bring the best weather of the day for the UK, as pressure fronts push away rainfall and bring cloudier skies across the country.

Some rainfall is expected in Wales, but it will be lighter than much of the country’s bouts at below 4mm an hour.

But by 9pm, more unsettled weather will hit bringing lighter showers across the western parts of the UK and the strong rains in the midlands and northwest.

That lighter rain will continue throughout early Monday morning, staying in western regions until around 6am. 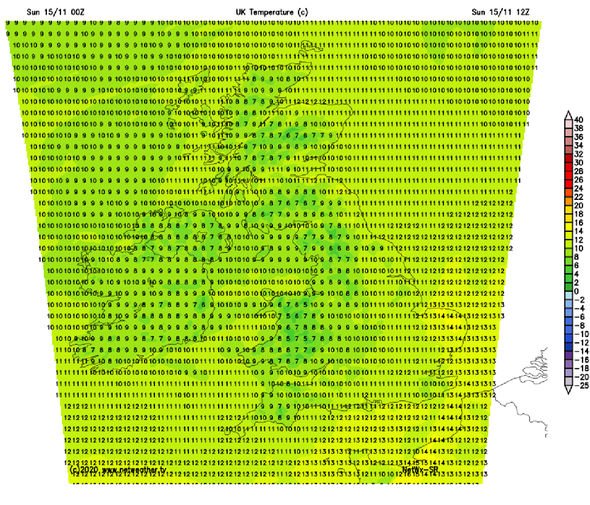 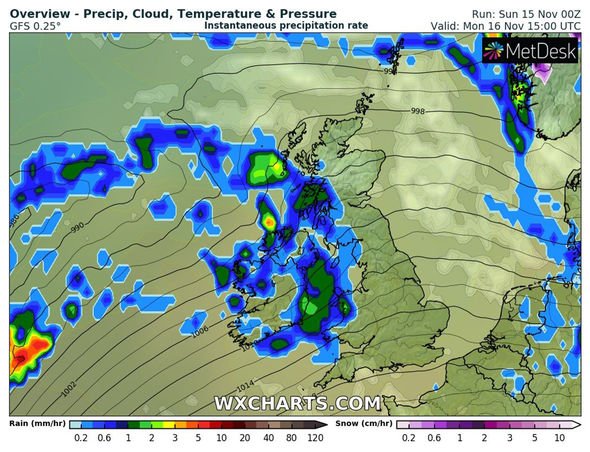 As Monday starts it will be a day of relief for much of the country as cloudy skies prevail across most of the UK.

Barring the northwest and northern-most parts of Scotland, 9am will bring cloudy skies and milder winds, with an average temperature of 8C (46.4F) from the midlands up and 11C (51.8F) for the south of England and Wales.

But yet another weather front will make landfall by 6pm, albeit with much lighter rains along gust of up to 33mph.

Scotland and Northern Ireland will then see stronger rains build up into Monday night.