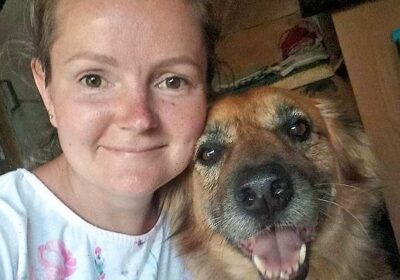 This is my mission’: Ukrainian vet and mother-of-two, 36, who stayed behind as the bombs rained down on Bucha saved hundreds of pets from Russian troops patrolling the streets

Just before dawn each day, Mariia Mykytiuk crept out of the basement of her two-bedroom home in the town of Bucha on the outskirts of the Ukrainian capital Kyiv.

Under Russian occupation, the neighbours who went jogging or out to the coffee shops had been replaced by menacing soldiers patrolling the suburban streets.

Mariia’s IT programmer husband had left to join the Ukrainian army, their children had been sent to stay with friends in Australia.

So why did the 36-year-old mother-of-two choose to remain? ‘Because this is my mission,’ replies the veterinary paramedic, gesturing to her animal sanctuary.

Before Vladimir Putin’s army surged into Bucha on February 27, most of its 35,000 population had fled, many leaving pets behind. 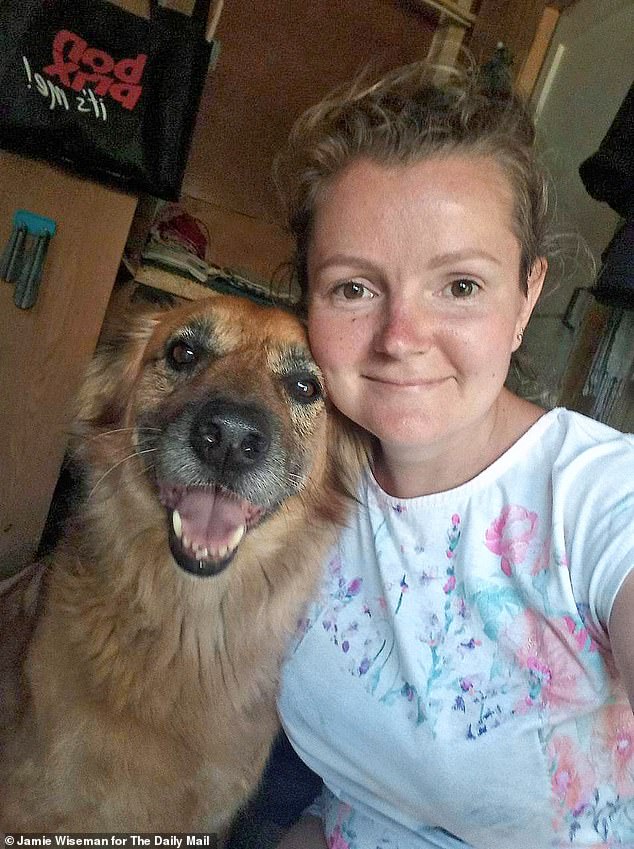 Mariia Mykytiu is a veterinary paramedic running a vital animal sanctuary in the capital. The 36-year-old mother-of-two chose to remain in Kyiv to save hundreds of pets

Armed with a hammer from her husband’s toolbox and carrying a bag of food to entice terrified and injured dogs, Mariia began searching Bucha’s body-strewn streets and abandoned houses for pets.

‘It was awful,’ she says. ‘The animals would be crying and walking around absolutely lonely and lost. The Russian soldiers were dreadful. If a dog barked at them because it was scared, it would be shot.’

She quickly learnt how to remove bullets and shrapnel from dogs and cats on her kitchen floor. ‘People were bringing me five injured dogs every day, but not a single one died,’ she says proudly. 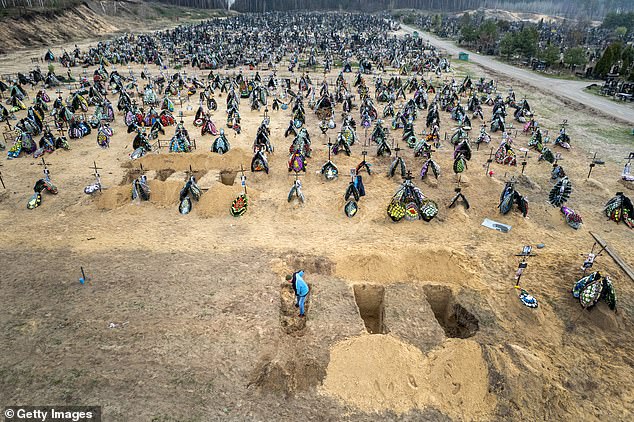 Pictured: A grave digger prepares the ground for a funeral at a cemetery on April 20, 2022 in Irpin, Ukraine. War crime investigations are underway into Russian military actions in Irpin, along with the town of Bucha and others around Kyiv

During the nightmarish 33 days when Russian troops were raping and murdering hundreds in Bucha, temperatures plunged and food ran out. Mariia made soup from dog food. ‘And when it was -5C, -10C at night the dogs would cuddle me and keep me warm in the bomb shelter,’ she says. ‘I saved them, but in return they saved me.’

At one point, Mariia was caring for 120 dogs and cats, and her activities attracted the attention of Bucha’s occupiers, who raided her house on four occasions.

The first time, she came perilously close to death. ‘It was around March 16 and these Russians barged through my front gate, demanding to see where my husband was,’ she says.

‘Socar [her own dog] started barking at them. He was protecting me, but one of the soldiers got his rifle and shot him dead. I spat at him. He pushed [his rifle] into my shoulder. I thought for sure my time is up, but one of the others said, ‘Come on, let’s go,’ and they checked my building and went away.’

Ukraine seized back control of Bucha from Russia’s 64th motorised infantry brigade on April 1 and, with the discovery of mass graves in the area, a war crimes investigation is under way.

Some of Mariia’s neighbours and friends have now returned and been reunited with their cats and dogs. ‘They say, ‘Thank you for saving my pet’,’ she says. ‘They call me a hero but I am not sure. I am just doing my job and besides, I think it was the animals who saved me.’