Uluru Statement: Invitation to walk from heart extended in 64 languages Young Lilia Tan moved to Australia from Singapore three years ago but she already understands that her school in Canberra is on Ngunnawal land.

The school's welcome to country acknowledges its traditional owners, the Ngunnawal people, before ending with Always Was, Always Will, the theme of this year's NAIDOC (National Aborigines and Islanders Day Observance Committee) week.

Coinciding with NAIDOC, the Uluru Statement of the Heart's invitation to all Australians to walk with them for a better future has been translated into 64 languages ranging from French to Arabic, Armenian, Urdu, Rohinga, Hebrew and Mandarin. 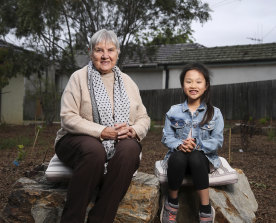 Aunty Pat Anderson and Lilia Tan in Canberra: The Uluru Statement from the Heart has been translated into more than 60 languages to reach a range of Australians from non-English speaking backgrounds. Credit:Alex Ellinghausen

Lilia's mother Christina Ng, an office manager with the Federation of Ethnic Communities' Councils of Australia (FECCA), said the family had little knowledge of Australia's First Nation's people until they moved from Singapore to Canberra three years ago.

At home, Lilia, 8, and her family speak Mandarin, English and Hokkien. Because Australia is a multicultural nation, Ms Ng said it's important to build deep connections between migrant communities and First Nations Peoples.

The translations by broadcaster SBS would for the first time allow many Australians to read and hear the "seminal statement in their first language", said Professor Megan Davis, UNSW Professor of Law and Balnaves Chair of Constitutional Law.

Endorsed in 2017 at Uluru, and led by Patricia (Aunty Pat) Anderson with Professor Davis, the 12-paragraph statement outlines a path for recognising Indigenous Australians in the constitution.

Writing in the Griffith Review, Professor Davis said the Uluru Statement from the Heart had been tactically issued to the people, not politicians.

"Uluru is the beginning of the process, the coming together after a struggle. And that, my friends, is the potential of the Uluru Statement from the Heart. It was deliberately issued to the Australian people, not politicians, because it is we, as a united people, who can unlock that potential in a referendum." 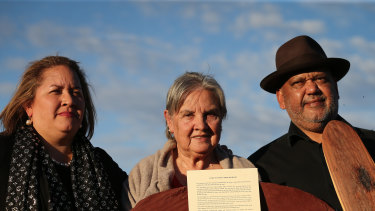 Megan Davis, Pat Anderson and Noel Pearson with a piti holding the Uluru Statement from the Heart in May 2017.Credit:Alex Ellinghausen

SBS will also provide podcasts of each translation.   The statement has yet to be translated into Australian Indigenous languages, many of which are at risk and down to their last speakers.

Support is growing though. The National Council on Churches said it was intending to make a public statement of support soon. Last week it held a seminar on reconciliation, attended by leaders from the Salvation Army, the Anglican Church, the Lutheran Church and the Seventh Day Adventist. Some of Australia's biggest companies and organisations, from KPMG to ACOSS, have also backed the statement. Others are holding regular discussions, including The Rotary Club of Sydney Peacebuilding Group.

Many NAIDOC week events have been cancelled because of the risk of COVID-19, but many events are online. Info: www.naidoc.org.au.