Home » World News » Up to 1.5MILLION households will struggle to pay food and energy bills

Up to 1.5MILLION households will struggle to pay food and energy bills 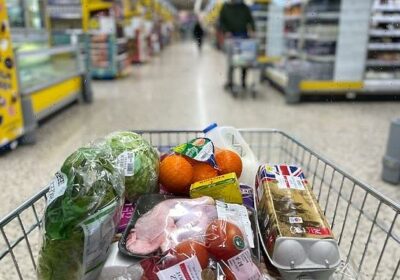 Up to 1.5MILLION households will struggle to pay food and energy bills amid cost-of-living crisis that will plunge UK into recession, think tank warns

Around 1.5 million UK households will struggle to pay food and energy bills amid a deepening cost-of-living crisis that will plunge the UK into a recession, according to a leading think tank.

The National Institute of Economic and Social Research (Niesr) blames soaring inflation and the war in Ukraine which will see many families hit with food and energy bills greater than their income.

It says the Spring Statement did not increase benefits in line with inflation that has seen supermarkets increase their prices, rail tickets, petrol and diesel soar and tax go up.

The think tank also claims that incomes will fall and believes more than 250,000 households will ‘slide into destitution’ next year, with the total number in extreme poverty to hit around one million unless urgent action is taken.

While approximately another 500,000 households face choices between eating and heating.

It comes after the Bank of England predicted that Consumer Prices Index (CPI) inflation will rise from 7 per cent currently to more than 10 per cent in October – its highest level in 40 years – due to soaring energy prices. 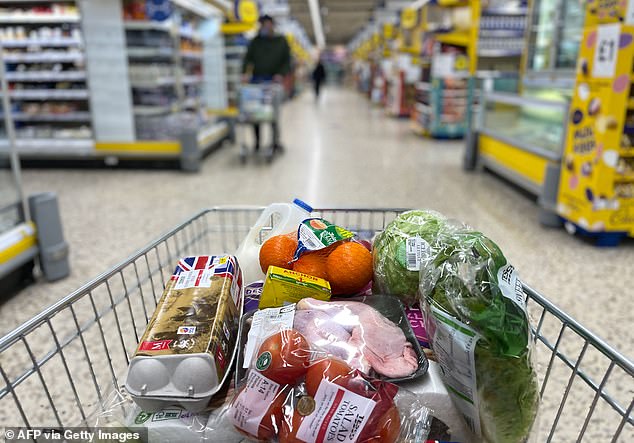 Soaring inflation compounded by the war in Ukraine will see many families hit with food and energy bills greater than their disposable income, the National Institute of Economic and Social Research (Niesr) estimates (stock image of supermarket trolley)

Niesr also forecasts that the crisis will see the UK fall into a technical recession this year – as defined by two quarters in a row of declining gross domestic product (GDP) – with the economy set to contract in the third and fourth quarters.

The think tank said Chancellor Rishi Sunak should hike Universal Credit payments by £25 per week and give a one-off £250 cash payout to the UK’s 11.3 million lower-income households.

And warns the poorest areas in the North West, pockets in London and the South East, as well as parts of Wales, Scotland and Northern Ireland will be hardest hit by April’s 54 per cent rise in the energy price cap and higher taxes (National Insurance Contributions and the freezing of income tax thresholds).

To meet rising costs, households will either have to run down their savings or resort to consumer credit or end up in arrears, as shown by the Living Wage Foundation.

But Levelling Up Secretary Michael Gove has ruled out an emergency budget, insisting Boris Johnson’s suggestion of more help to ease the cost-of-living crisis was ‘over-interpreted’.

‘It is an example of some commentators chasing their own tails and trying to take a statement that is common sensical, turning it into a major, capital letters, big news story,’ he said today.

‘And in fact, when the Treasury quite rightly say, calm down, people instead of recognising that they have over-inflated the story in the first place, then say ”oh, this is clearly a split”.

The hardest hit households whose food and energy bills are greater than their disposable income (in 2022 to 2023). Source: LINDA

Niesr’s report predicts the Bank of England will have to raise interest rates to 2% by the end of 2022 and to 2.5% next year to try and curb soaring inflation.

It warned the Bank will have to ‘navigate carefully the treacherous waters caused by the tension between, on the one hand, allowing inflation expectations to de-anchor and, on the other hand, plunging the economy into a deep recession’.

The report comes after Bank governor Andrew Bailey last week raised the spectre of recession and warned inflation would peak at 10.25% later this year.

The Bank forecast the UK economy would contract in the fourth quarter of 2022 and fall overall in 2023 with ‘very weak’ quarterly growth, although it said Britain would avoid a technical recession.

Niesr’s forecasts suggest inflation will peak at the lower level of 8.3%, although it echoed the Bank’s alerts over a sizeable hit to household incomes and a rise in unemployment as the cost crunch hits hard.

Niesr said: ‘The medium-term outlook for GDP growth is slow even by the standards of recent history, returning to 1.5% only in 2026.

‘The combination of shocks – Brexit, Covid-19 and the recent shocks to energy prices – is set to leave the incomes of people in the UK permanently lower.’