US braces for turbulent handover as Trump fires defence secretary Washington: Senior US government officials are bracing for a potential purge during the lame duck period of Donald Trump's presidency after the President fired Defence Secretary Mark Esper in a tweet.

Trump's firing of Esper came as a key federal government agency refused to sign the paperwork permitting President-elect Joe Biden’s transition team to formally begin their work, setting the stage for one of the most turbulent presidential handovers in American history. 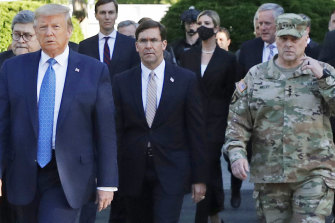 Front from left: Donald Trump, Secretary of Defence Mark Esper and Chair of the Joint Chiefs of Staff, General Mark Milley, in June.Credit:AP

The Trump campaign and many senior Republicans show no sign of conceding defeat any time soon, despite Biden's lead in several battleground states growing larger as the final votes are counted.

"Mark Esper has been terminated," Trump tweeted on Tuesday (AEST). "I would like to thank him for his service."

Esper had pushed back earlier this year against Trump's calls to invoke the Insurrection Act, which would have allowed him to send National Guard troops into American cities against the wishes of state governors. 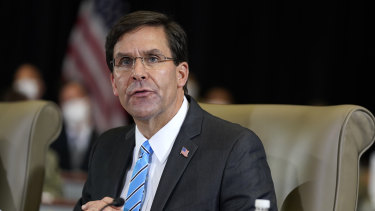 Trump discussed firing FBI Director Christopher Wray and CIA Director Gina Haspel with associates before the election because he believed they had been insufficiently loyal to him.

He also suggested that he would like to fire Dr Anthony Fauci, the country's top infectious disease expert, but he does not have the power to do so because Fauci is a non-political public service appointment. 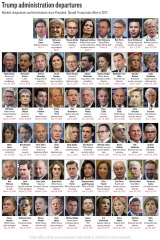 The Trump campaign is pushing ahead with legal challenges to the results in closely-contested states such as Pennsylvania and Michigan despite having little realistic prospect of reversing Biden's projected Electoral College victory.

Part of the reasoning for the refusal to accept defeat appears to be financial: the Trump campaign continues to bombard supporters with emails urging them to donate to its "election defence" efforts. The fine print of the emails notes that the money raised can also be used to pay down the campaign's debts from the election.

Republicans also believe that keeping their base fired up about the election results will help motivate conservatives to vote in the Georgia Senate run-off elections in early January.

These contests will determine which party controls the US Senate.

Republican Senators Kelly Loeffler and David Perdue of Georgia called on their state's top election official – also a Republican – to resign on Tuesday, citing unidentified "failures" in the election process.

Speaking on the Senate floor, Republican Senate leader Mitch McConnell declined to recognise Biden as the president-elect and said Trump was within his rights to challenge the results in the courts.

"If any major irregularities occurred this time of a magnitude that would affect the outcome, then every single American should want them to be brought to light," he said. “If the Democrats feel confident that they have not occurred, they should have no reason to fear any extra scrutiny."

More than two days after US media outlets projected Biden as elected, Emily Murphy, the administrator of the little-known Government Services Agency, had not signed paperwork acknowledging Biden as the apparent winner.

Such a declaration would not affect the results in any way, but would help the Biden transition team to begin preparing to take office.

It provides transition officials with government email addresses, office space at federal agencies and to begin work with the Office of Government Ethics to process financial disclosure and conflict-of-interest forms for potential appointees to government roles.

Biden on Tuesday announced the members of his White House coronavirus taskforce. Among them is Rick Bright a whistleblower and former top vaccine official from the Trump administration who alleged that his early warnings about the pandemic were ignored and led to his removal.

Understand the election result and its aftermath with expert analysis from US correspondent Matthew Knott. Sign up to The Sydney Morning Herald‘s newsletter here, The Age‘s here, Brisbane Times‘ here and WAtoday‘s here.