Taipei: A senior US State Department official is due to arrive in Taiwan on Thursday afternoon to begin a three-day visit that has already drawn a warning from China.

US Undersecretary of State Keith Krach is due to meet Taiwan's President Tsai Ing-wen and other senior officials, the island's foreign ministry said on Thursday. Krach is the highest-level official from the State Department to visit the island in decades. 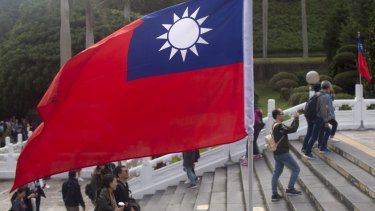 Taiwan’s flag stands at the National Palace Museum in Taipei.Credit:Bloomberg

His visit follows the high-profile visit in August of US Health Secretary Alex Azar, who was the highest-level US Cabinet official to visit since a break in formal ties between the US and Taiwanese government in 1979, when the US accepted the “one-China policy” with Beijing as its government.

However, the US has maintained unofficial ties with Taiwan since the official diplomatic break and is the island’s most important ally and provider of defence equipment.

Krach is expected to participate in an economic dialogue with the Taiwanese government. He will also attend a memorial service for Lee Teng-hui, the former president who led the island's transition to democracy and who died in July.

Krach's visit has already been condemned by China, which views self-governing Taiwan as a part of its national territory and opposes official interactions of any sort between other countries and the island.

On Monday, Chinese foreign ministry spokesman Wang Wenbin urged the US at a daily briefing to “stop all forms of official exchanges with Taiwan, so as to avoid serious damage to China-US relations and peace and stability across the Taiwan Strait.”

Our weekly newsletter will deliver expert analysis of the race to the White House from our US correspondent Matthew Knott. Coming soon. Sign up now for the Herald‘s newsletter here, The Age‘s here, Brisbane Times‘ here and WAtoday‘s here.