US Marine filmed blindside tackling 2 brawling students to the ground A US Marine was caught on camera brutally tackling two teenage boys to the ground in an effort to stop their fight while at their school.

The video, shot by a bystander, shows two unnamed students hitting and kicking each other on the grass at Edison High School in Stockton, California, on Wednesday, according to KCRA.

As they are fighting, a man wearing a black t-shirt and camouflage pants can be seen running straight for the kids from the left, before tackling them both the ground. 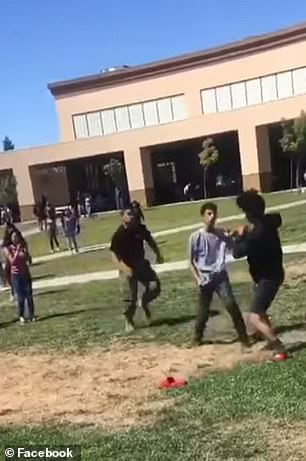 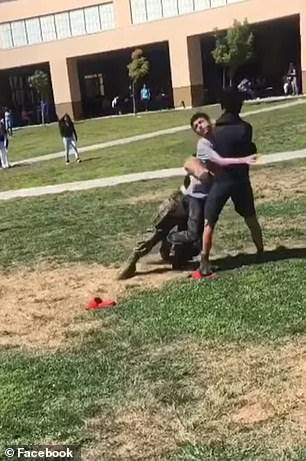 US Marine Josue Valdez Sarmiento was caught on camera blindside tackling two teenagers while they fought on their high school campus in Stockton, California 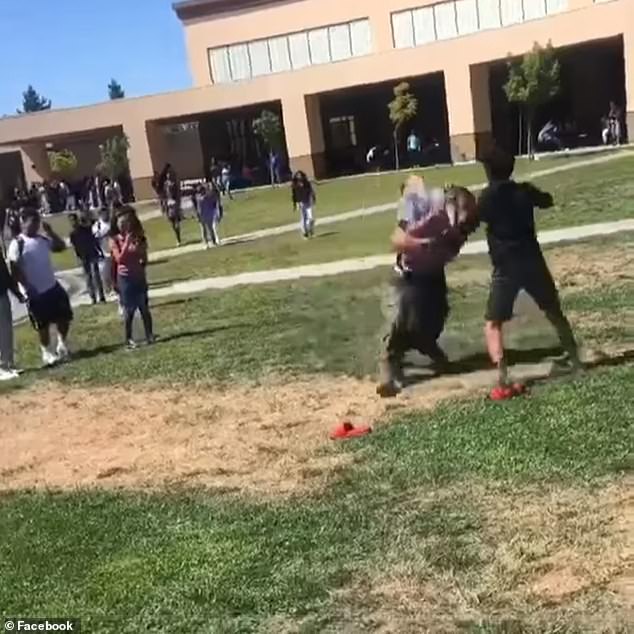 One of the boys’ heads snaps back when Valdez Sarmiento slams into him, forcing him to brutally collide with the boy that he was fighting with 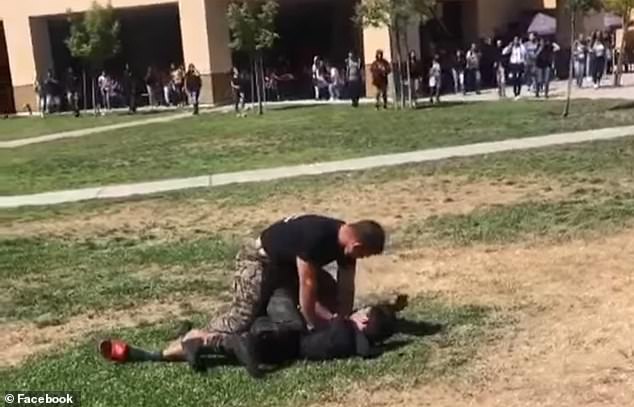 During the blindside tackle, the teen in a light-colored shirt is hit first, causing him to smash straight into the other boy in what appears to be a very painful, if not dangerous, collision.

The man, who has since been identified as US Marine Josue Valdez Sarmiento, then uses his body weight to push the two boys down into the ground, before pulling one of the boys up by his sweatshirt and then dropping him back down onto the grass.

Several teachers then head over to separate the boys and check to see if they are okay. Valdez Sarmiento, meanwhile, is joined by another unnamed Marine and they walk away as if nothing has happened.

The boy in the light-colored shirt appears to be unable to stand up and can be seen rolling around on the ground, while covering his face.

Valdez Sarmiento is said to be a former student at Edison High School and a private first class in the Marine Corps.

The US Marine Corps told KCRA that he was on campus that day to help with recruiting, but that he is not actually a recruiter.

U.S. Marine Maj. Thomas Driscoll told the news station that Valdez Sarmiento ‘saw a dangerous fight break out. Upon observing that situation, he moved over and broke up the fight.’ 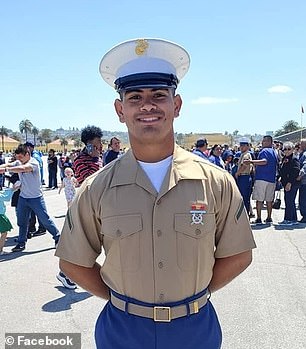 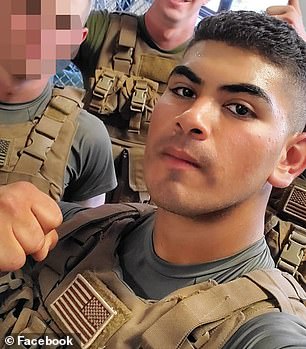 Valdez Sarmiento is said to be a former student at Edison High School and a private first class in the Marine Corps. He was on campus assisting with recruiting, but is not a recruiter 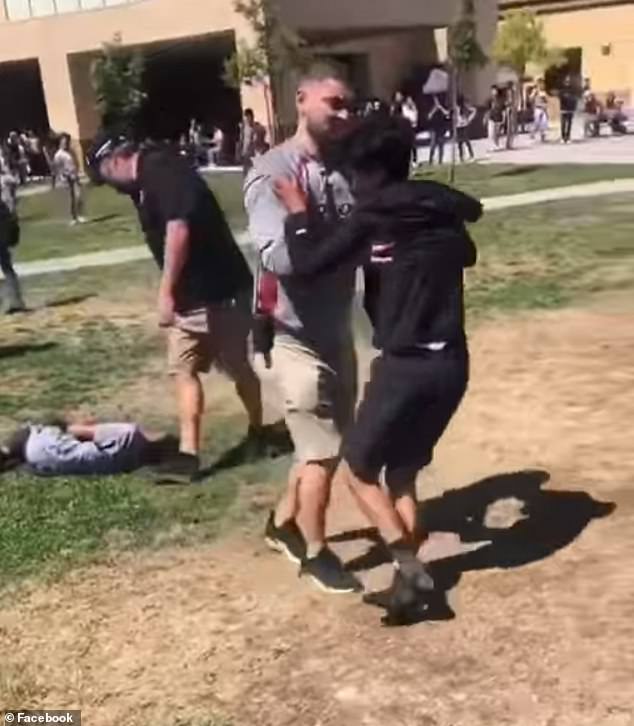 As Valdez Sarmiento walks away, teachers approach and separate the two boys 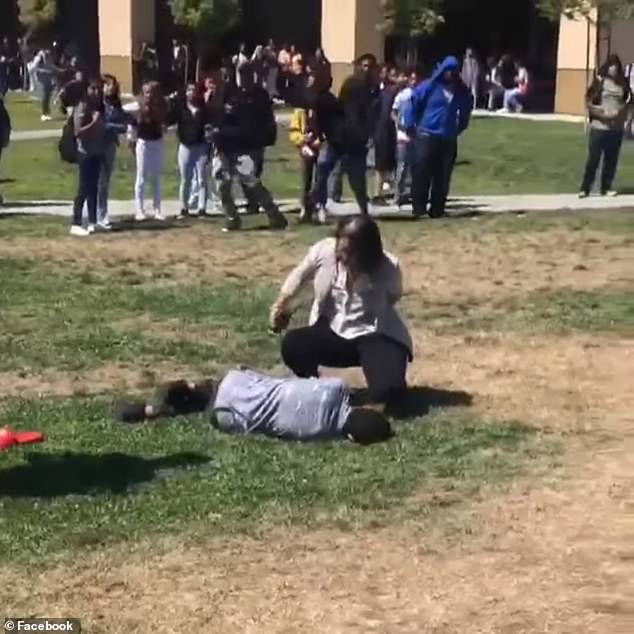 The boy who was tackled first could be seen rolling around on the ground and covering his face, apparently unable to stand up 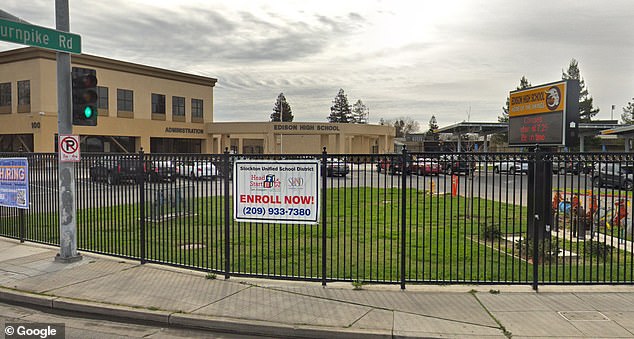 Driscoll added that the Marine Corps was ‘proud’ of Valdez Sarmiento’s ‘decision to intervene’ in the fight, but noted that ‘the manner in which he did (could) have been improved.’

209 Times reported that Valdez Sarmiento ran towards the children from more than 30 yards away and that it appeared that he did more damage to the boys than the actual fight itself had produced.

The grassroots news organization said that the school’s staff allowed the fight to continue for more than a minute without intervening.

Edison High student Johnny Hempill told KCRA that Valdez Sarmiento used ‘just too excessive (of) force’ when tackling the boys, adding that ‘I feel like going at a kid, especially when he’s not looking, makes more of an impact.’

The Stockton Unified School District said that it is actively investigating the incident, as well as the faculty’s response to the situation, and is ‘aware of the student matter that took place on 9/11/19 at Edison High School and the recording circulating on social media.’

The Stockton Police Department is allowing the school to handle the investigation.

It’s unclear whether the students were injured or whether Valdez Sarmiento will face any disciplinary action.