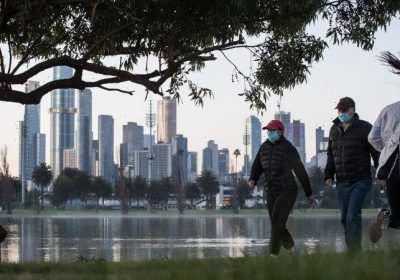 Victoria has recorded one new local case and three overseas acquired cases in the past 24 hours.

The Department of Health said the new local case is a known primary contact of another case and the person has been in quarantine throughout their infectious period.

The new case comes as The Age can reveal the two men who tested positive to COVID-19 in Melbourne after exposure to a Sydney superspreader event were both unvaccinated despite being aged over 60.

The two men – who work at a Sandringham dry cleaning store and are aged 61 and 63 – are both yet to be vaccinated.

A government source confirmed the pair had not received a jab, which significantly decreases the likelihood of infection and transmitting the virus.

Victorian health officials on Friday said they were unaware why NSW’s health department had not contacted the man who attended his daughter’s social event in Sydney over the weekend.

It is unclear whether the daughter included the man on her list of people who attended the event.
The first dry cleaner worker to test positive attended work on Wednesday morning after feeling symptoms on Tuesday night.

Genomic testing has shown the two men have been infected with the highly contagious Delta variant of coronavirus, Chief Health Officer Brett Sutton has confirmed, after one of the men attended a weekend birthday party in Sydney that NSW health authorities dubbed a “super-spreader event”.

The Oakleigh man, who unknowingly carried the virus back to Victoria and passed it onto his boss at a Sandringham dry-cleaning business, is the father of the woman who hosted the Sydney event.

Victorian contact tracers are now chasing down 126 passengers and additional crew from the Sydney-Melbourne flight, as well as about 100 customers who visited the dry-cleaning business.

The owner the dry-cleaning outlet, Henry Li, who has run his business for 19 years, told 3AW’s Neil Mitchell on Friday that he and his employee wore masks at all times, used hand sanitiser and followed other precautions, but the virus had clearly spread when the pair worked together for just a couple of hours on Wednesday.

“This is horrible because we were really careful with everything. We still got it,” Mr Li said. “I don’t know what’s happened. We wore masks at work and used sanitiser to clean our hands.”