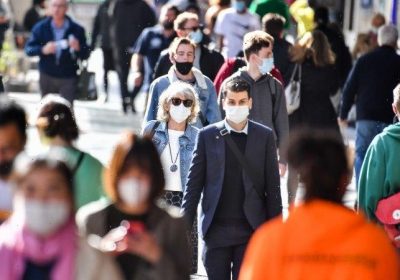 Victoria will enter a five day statewide lockdown in response to a growing coronavirus outbreak in Melbourne.

The development comes as Victoria recorded an additional two new cases of coronavirus on Thursday afternoon , taking the total number of cases linked to the new outbreaks to 18, and another two schools were forced to close. 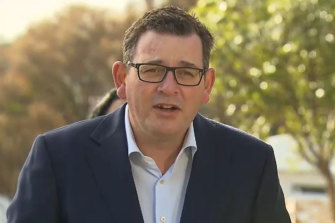 Victorian Premier Daniel Andrews’ had announced the state will enter a fifth lockdown.Credit:Nine

Victorian Premier Daniel Andrews said the move would allow the state time to get on top of contact tracing and prevent more spread of the virus.

“I want to assure all Victorians that our contact tracers are public health experts … moving faster than they ever have been doing.

“But as fast as they’re moving, they’re just keeping pace with this virus, they’re not getting in front of it. And unless they get in front of it, we won’t drive these numbers down. In fact, they will ultimately get away from us.

“That is why it’s with a heavy heart but with an absolute necessity and a determination to beat this, this delta spike, just as we did a few weeks ago, that the Chief Health Officer and the public health team have recommended to me and my Cabinet colleagues that we lock Victoria down”

The state’s two new cases – an adult and a child who sat separately at the MCG during Saturday’s match between Carlton and Geelong – are on top of the 10 new cases officially recorded on Thursday but reported throughout the day on Wednesday.

COVID-19 response commander Jeroen Weimar said the two fresh cases were not known to each other or the other two previously confirmed cases at the MCG.

Mr Weimar said they were sitting in “very different parts of the ground” and that the MCG was now the focus of the state’s contact tracers.

“Both these cases put us in a serious situation. We need to establish whether there are any other people who were at the MCG – that’s a critical bit of information we need to get to today.

“If you are getting those tier-1, tier-2 text messages and you haven’t got tested, we need you to come and do that now.

“Whatever you’re doing at the moment, stop doing it. Please come and get tested so we can get that information and get you safe and secure.”

Mr Weimar also noted that one of the new MCG cases was linked to two gyms in Melbourne’s west that were added to the official list of exposure sites on Wednesday morning.

Despite concerns about further transmission at the MCG, Mr Weimar lauded the speed of the state’s health team.

“This is probably the fastest response we’ve ever seen to an outbreak moving more quickly than we’ve ever seen here in Victoria, or I suspect anywhere else in Australia.”

Meanwhile, it has emerged that a man is his 30s who contracted the virus at a Coles in Craigieburn was actually an acquaintance of a positive case who had recently returned from Sydney.

Officials revealed on Wednesday that the man tested positive after visiting the supermarket in Melbourne’s north at the same time as a man who lives in the City of Hume who was infectious.

“We’re confident with that particular exposure site that … they’ve spent a bit of time together to achieve that transmission,” Mr Weimar said.

Victoria’s latest coronavirus outbreaks, which now take in a total 16 cases including at least two children, are both offshoots of Sydney’s Delta clusters: three Sydney removalists who breached their permit conditions and a family who returned from Sydney and were supposed to be isolating at home.

A primary school in the border town of Wodonga also shut its doors on Monday and sent all children and staff home after two students attended a tier-one exposure site on the weekend.

The two students at St Monica’s have not tested positive to the virus, however the school has been closed as a precaution.

Principal Jacqui Partington wrote to the school community earlier today, notifying them of an immediate shutdown and directing all students and anyone who has been on site to “isolate immediately until further notice”.

“We will remain shut down until we know for certain that it is safe to return to site,” Ms Partington wrote.

St Monica’s is the fourth Victorian school to close in the past 24 hours, following the closure of St Patrick’s Primary in Murrumbeena, Bacchus Marsh Grammar and Barwon Heads Primary.

Parents and carers at St Patrick’s Primary in Murrumbeena were asked to collect their children on Thursday morning after a student, the child who attended the MCG on Saturday tested positive for the virus. 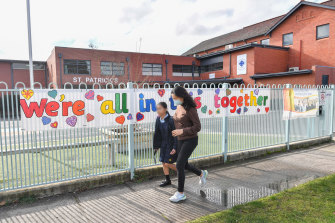 St Patrick’s Primary in Murrumbeena has been closed after a positive case attended the school.Credit:Joe Armao

All grade 4 students at the Catholic school in Melbourne’s south-east were ordered to go directly to a testing station before heading home and isolating until further notice. Students in other year levels have been encouraged to get tested.

He said 49 staff and 527 students at Barwon Heads Primary had been identified as either primary or secondary close contacts.

“We’ve got local testing set up … the school community has been fantastic,” Mr Weimar said.

Many schools also told their students to take their things home as the school bell rang on Thursday afternoon in anticipation of a return to remote learning.

Tina King, the acting president of the Australian Principals’ Federation, said schools were preparing for an imminent announcement.

“I’ve spoken to a few secondary principals, they are telling their kids, take your stuff home tonight just in case,” she said.

Ms King said schools had plenty of practice in making a swift transition to remote learning and could potentially do so tomorrow.

“We’ve learnt how quickly we can do that transition,” she said.

The list of high-risk exposure sites now includes over 80 exposure sites, including public transport routes, a CBD pub, the MCG, Highpoint Shopping Centre and DFO University Hill in Bundoora. The men’s toilet at Oakleigh shopping centre was added as a tier-1 location on Thursday afternoon.

Western Australia on Wednesday enforced new border restrictions on visitors from Victoria, who must isolate for 14 days upon entering the state, while South Australia also tightened restrictions for Victorians, requiring them to undertake a COVID-19 test within 24 hours of arriving and not enter high-risk settings such as aged care for 14 days after arriving.

Four of the cases announced on Wednesday were residents of the Ariele Apartments complex at Maribyrnong in Melbourne’s north-west. The parents of one of those residents, a man in his 60s, also tested positive, making cases five and six.

The seventh reported case was the man in his 30s who visited the Coles in Craigieburn Central.

Case eight was a teacher from Bacchus Marsh Grammar who watched the Carlton versus Geelong AFL match at the MCG on Saturday with a friend who lives in the Ariele Apartments.

Two of his family members have also tested positive, becoming cases nine and 10. 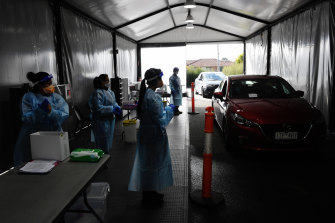 Cars queuing at a COVID-19 testing site in Craigieburn on Thursday.Credit:Justin McManus

There were 27,061 COVID-19 test results processed in the 24 hours to midnight on Wednesday, and more than 15,161 people received their vaccine doses.