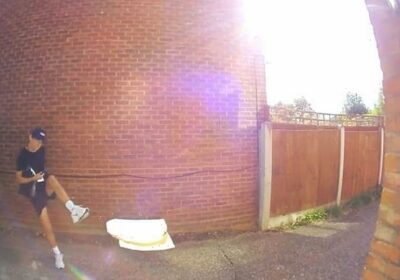 A woman was shocked when a delivery driver kicked her parcel into her front door as if he was curling a screamer into the top corner at Wembley.

Georgia Mason had ordered a delivery of clothing to her home in Sheffield, South Yorkshire, and filmed what happened on her video doorbell.

It appears her delivery man had decided to get some football practice in on his round. 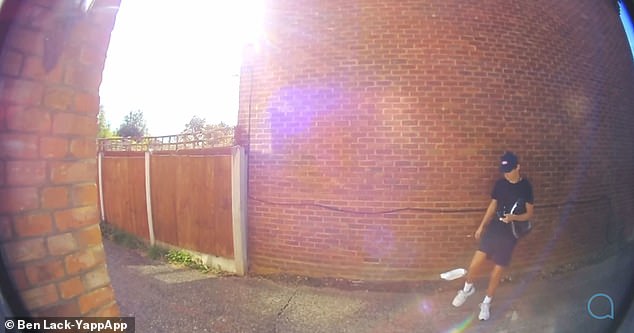 Georgia Mason was shocked to discover a courier drop-kicking her package as he delivered it to her home in Sheffield, South Yorkshire 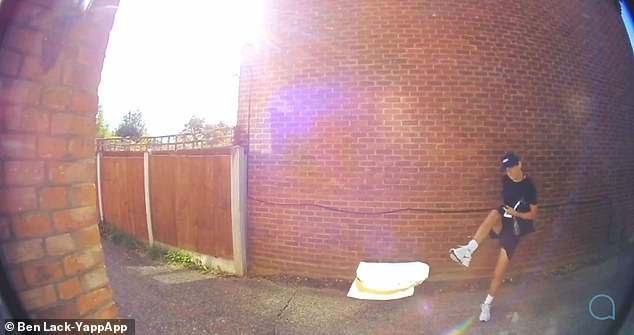 Ms Mason posted footage of the miscreant delivery driver online after noticing his appalling behaviour. She said the driver walked off and did not even ring her doorbell

The man can be seen turning up at the house and kicking the parcel before retreating towards is next delivery.

The driver, unaware every move he made was caught on camera, hit the package with his right foot, sending it spinning towards the front door.

He then walks off out of shot without even a backward glance to check if either the door or package had been damaged.

The driver was casually dressed in dark shorts, a baseball cap, and T-shirt. It was not clear which delivery carrier he was working for.

Ms Mason said: ‘Has anyone else had their packages delivered to them like this. This is a disgrace.’

She received a notification on her phone from her Ring doorbell that someone was outside.

The man had left before she could get to the door. When she played back the recording she could not believe her eyes, and admitted she was frightened by the man’s strange behaviour.

Posting on social media, she said: ‘I am so angry. It was only clothes in the order so nothing fragile. But that is not the point. Please help me. I’m so scared.’