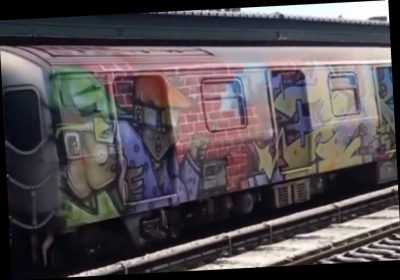 Graffiti artists struck multiple cars of an M train, completely defacing them from top to bottom with colorful tags and doing tens of thousands of dollars of property damage, the MTA said Wednesday.

Video posted to Instagram on Monday shows the subway train — featuring cartoon-like characters and depictions of a skyline exposed through a brick wall — chugging along the tracks of an unspecified elevated Big Apple station.

Officials discovered the vandalism at around 6:50 a.m. Monday, according to the MTA.

The vandals apparently hit the train at a so-called layup area in Queens near the Forest Hills-71st Avenue Station, which falls under the responsibility of the NYPD to patrol, the transit agency said, noting that the incident was reported to the police department.

The graffiti train has since been taken out of service.

“Vandalism costs New Yorkers — it deprives customers of service while cars are cleaned, it requires transit workers to scrub graffiti rather than see to their regular duties, and it costs taxpayers money that could be used to improve service,” MTA spokesman Shams Tarek told The Post in a statement.

“We are cooperating with the NYPD in its investigation of this latest case of trespassers causing tens of thousands of dollars of damage, and we will seek restitution from anyone found culpable.”