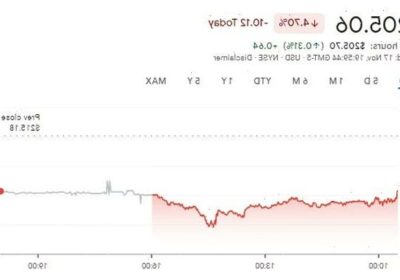 Visa’s share price has plummeted after Amazon said it will stop accepting the firm’s credit cards issued in the UK.

The US financial services corporation watched in horror as shares in New York slumped 5.2 per cent to $203.96 yesterday morning.

Experts warned the move was the ‘opening gambit’ in a battle to drive down huge fees on purchases customers and retailers are charged.

They said Amazon was shadowing a tactic used by Walmart five years ago which saw them strike a better deal with Visa.

It comes as the e-commerce giant last night revealed it was considering dropping the firm as partner on its US co-branded credit card.

This was just hours after confirming it would stop accepting Visa credit cards in the UK as the dispute over payments intensified. 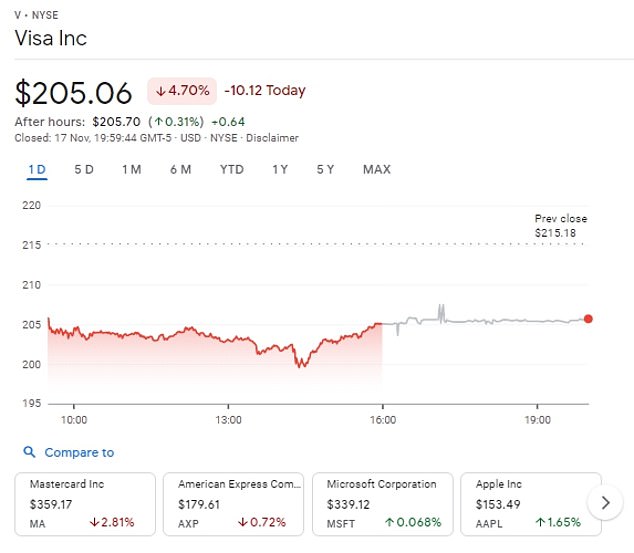 The US financial services corporation watched in horror as shares in New York slumped 5.2 per cent to $203.96 yesterday morning 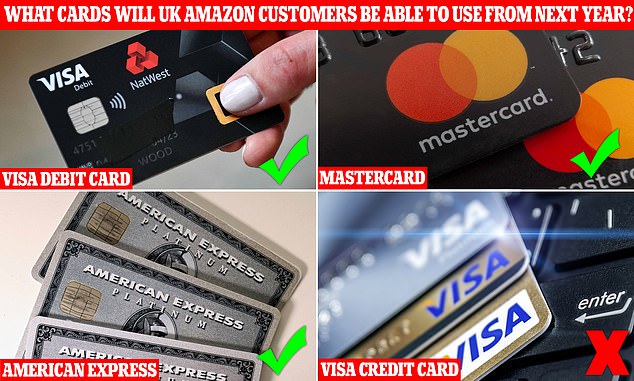 How are payment fees arranged in Britain?

A retailer accepting card payments works with a financial institution known in the industry as an ‘acquirer’ such as a bank or company like Worldpay offering payment services.

These companies charge a fee to their merchants based on three factors.

The first is a fee to provide terminals in store and online services.

The second is an ‘interchange’ which is a fixed rate going from the retailer’s bank to the cardholder’s bank.

The third element is a fee that goes to the card provider for managing the transaction. For Visa, typically on average across all UK transactions this is less than 0.1 per cent.

The total percentage is normally a confidential figure that will vary between companies for the same type of card.

It means the share price has slumped 6.6 per cent this year compared to a 29 per cent rise for the S&P 500 Information Technology Index.

Shanti Kelemen from M&G Wealth told Today: ‘I think this is the opening gambit in a negotiation that’s probably been going on for some time.

‘Walmart did a similar thing in 2016 and they never went through with it, they ended up reaching an agreement with Visa.

‘The UK is pretty small compared to Visa’s global payment footprint, but the real danger for Visa is if this would spread globally it could have a significant impact on their revenue.’

Walmart’s fallout with Visa started in 2014 when it sued the card firm for more than $5 billion for charging shoppers ‘unreasonably high’ fees.

The row escalated in June 2016 as the company’s 370 Canada stores banned Visa cards over ‘unacceptably high’ fees for six months.

Chris Hemsley from the Payment Systems Regulator said: ‘One of the things we’ve recently published this month is our definitive analysis.

‘It showed some of these scheme fees have increased quite significantly. They’ve doubled within a four-year period from 2014.

‘So what we’ve done on the back of that is we think there are questions on whether this market if working sufficiently well for retailers and consumers.

‘So we’ve announced further work to really investigate that properly so we can think about what action we need to take if and when we find significant problems.’ 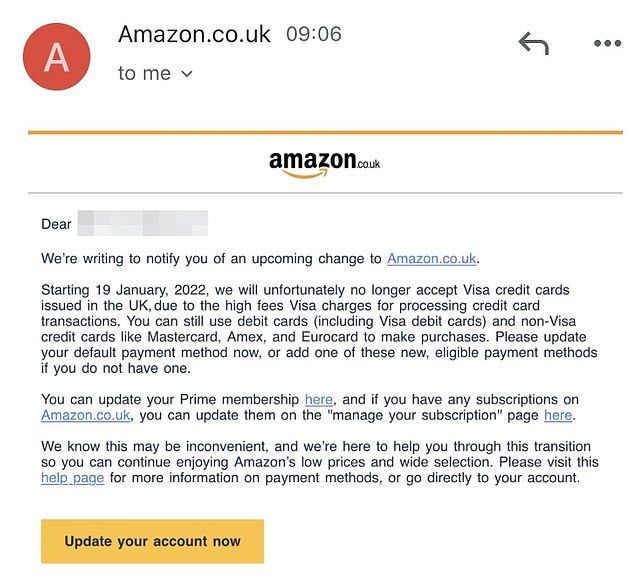 We’re writing to notify you of an upcoming change to Amazon.co.uk.

Starting 19 January, 2022, we will unfortunately no longer accept Visa credit cards issued in the UK, due to the high fees Visa charges for processing credit card transactions. You can still use debit cards (including Visa debit cards) and non-Visa credit cards like Mastercard, Amex, and Eurocard to make purchases. Please update your default payment method now, or add one of these new, eligible payment methods if you do not have one.

We know this may be inconvenient, and we’re here to help you through this transition so you can continue enjoying Amazon’s low prices and wide selection. Please visit this help page for more information on payment methods, or go directly to your account.

Amazon last night revealed it was considering dropping the firm as partner on its US co-branded credit card.

The e-commerce giant is in talks with Mastercard Inc, American Express Co and Visa as part of what it called its standard process for reviewing its co-branded credit card.

Visa declined to comment on the co-branded card. Mastercard and American Express did not respond to requests for comment.

In recent months, Amazon has introduced surcharges on customers using Visa cards in Singapore and Australia, citing high fees, as the row between the firms continues.

Since Britain’s exit from the EU, an EU-enforced cap on fees charged by card issuers is no longer in place in the UK, meaning providers are free to hike charges.

Visa last month began charging 1.5 per cent of the transaction value for credit card payments made online or over the phone between the UK and EU, and 1.15 per cent for debit card transactions, up from 0.3 per cent and 0.2 per cent, respectively.

The average credit card processing fees across the industry range between 1.5 per cent and 3.5 per cent of each transaction, according to analysts.

Historically, retailers had accepted processing charges by major credit card firms as the cost of access to their huge network of card users, analysts said, but that could be changing.

The move marks an ‘important turning point in the payments industry,’ said Laura Hoy, equity analyst at Hargreaves Lansdown, adding Amazon may hope to drive more customers to its own payments system.

‘Ultimately, we think Amazon has the edge in this game of chicken – whether customers adopt its own payment system or Visa gives in and lowers its fees, either is a win for the retail giant,’ Hoy said.

In the past, other big retailers have settled fee disputes with Visa after announcing they were going to quit taking Visa credit cards in narrow segments of their businesses.

Walmart Inc’s unit in Canada, for example, said in 2016 it would stop accepting Visa credit cards after being unable to reach an agreement on fees. Seven months later the companies said they had settled the matter after about 20 stores stopped taking Visa cards.

Amazon customers can still use Visa debit cards, Mastercard and Amex credit cards, and Eurocard, in the UK, Amazon said in a note to customers.

Visa said in a statement it was ‘disappointed that Amazon is threatening to restrict consumer choice.’

‘We continue to work toward a resolution, so our cardholders can use their preferred Visa credit cards at Amazon UK without Amazon-imposed restrictions come January 2022,’ Visa added.

The British Retail Consortium said other retailers in the UK faced higher charges for cross-border payments, following Britain’s departure from the European Union.