Melbourne’s Metro Tunnel rail project could suffer further cost blowouts and delays, according to the Victorian Auditor General’s Office, which has revealed the project has nearly burnt through all its contingency funds.

The Metro Tunnel consists of two nine-kilometre train tunnels under the CBD with five new underground stations. It is set to open by 2025. 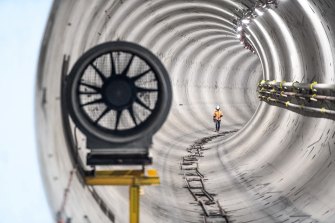 An Auditor-General’s report released on Wednesday found the key tunnel and station phase of construction was running $364 million over budget, after it was hit by pandemic-related delays and supply chain disruption.

However, the Andrews government’s decision in May to cut some network upgrades as part of the project has offset that overspend. Rail Projects Victoria forecast that with those savings, the overall project will cost $12.58 billion – or $1.88 billion more that the original budget approved in 2017.

“The [Metro Tunnel Project] has experienced some cost overruns and time delays since the contract reset. As the project moves into the next risky phases further cost and time pressures could appear,” the report says.

“These ongoing cost and time pressures leave RPV limited flexibility to address future risks because they have either used or allocated almost all their risk contingency funds.”

RPV has already burnt through $727 million of the project’s $740 million risk contingency funding after the COVID-19 pandemic delayed construction by 52 days, and it was forced to find a solution to precent electromagnetic interference from trains disrupting equipment at hospitals and research institutions in Parkville and near the State Library.

Transport Infrastructure Minister Jacinta Allan said major projects were being delayed around the world due to supply chain disruptions from the COVID-19 pandemic, and the government had been upfront about challenges on the Metro Tunnel.

“I’m acknowledging that this is a project that has those ongoing cost pressures like projects around the world,” she said.

“A project of this size and scale has had some challenges, and we’ve had some particular budget challenges. We’re continuing … to work through the consequence of the impact of COVID on our workforce. Those impacts are continuing to be felt by the project.”

The Auditor-General’s report said “risky and complex” upcoming stages of the project that could lead to more blowouts included installing rail systems, testing trains in the tunnels, integrating signalling and communications systems, and fitting out the five new underground stations.

Extra costs to the state could also stem from a proposal from the builders to accelerate construction to make up for the time lost to the COVID-19 shutdown.

The report recommends RPV finalises its position on this plan and brief the government on “any cost or other implications” of accepting it.

The government should also conduct a comprehensive review of the project’s overall budget and determine how much extra funding could be needed, the audit said, while formalising measures to mitigate electromagnetic interference.

The government has saved $91 million by cutting 27 kilometres, or about a third, of the high-capacity signalling that was to be installed as part of the project, and saved another $236 million by limiting several “wider network enhancements”, including signalling upgrades and “train turn-back locations”.

Allan said the project changes were prudent as they could be delivered more effectively as part of other related railed projects, like the Airport Rail Link.

Opposition transport infrastructure spokesman Matt Bach said that every major Andrews government project had “failed to stick to a deadline and budget”.

“Labor has shown time and time again that it can’t manage major projects and it is sending our state broke,” Bach said.

The state government and the project’s builders consortium, the Cross Yarra Partnership, rewrote their 2017 construction contract in 2020 to accommodate cost blowouts of up to $2.74 billion, with taxpayers to cover $1.37 billion of that.