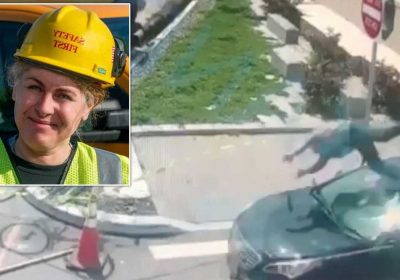 4 charged in connection to death of woman found in Queens trunk: cops

Staggering new video has captured the moment a doomed love triangle erupts in murder and revenge — at a Bronx traffic triangle.

The video starts with Lizbeth Mass, 52, being gunned down on the sidewalk — allegedly by her jealous suitor, Geraldo Reyes — during her lunch break at her City Island construction site on Wednesday.

But as horrific as her murder is — she was shot six times in broad daylight, police say — what happens next is chilling.

As Mass lay crumpled on the sidewalk, the murderer calmly walks back toward his bicycle, tucking his gun in his waistband, video of the scene obtained by The Post shows.

Seconds later, her boyfriend, identified by police as Dwayne Walker, allegedly sprang into action to stop Reyes from peddling off.

Walker’s Hyundai Sonata blasts into the picture from left to right, ramming into his girlfriend’s alleged murderer, and sending him and his bike flying.

The thrown man struggles to rise to his feet, grabbing onto a “Detour” sign for balance.

But seconds later, the Sonata roars back into the picture, from right to left — without its driver — and it rams the alleged gunman a second time, this time in reverse.

The apparently enraged boyfriend then catches up on foot, pushing Reyes onto the hood of the car, and pummelling him repeatedly, the video shows.

The beating continues for about 30 seconds until bystanders and officials arrived.

The accused murderer, a handyman who lived alone in a South Bronx basement, often ate lunch with Mass, but grew enraged after finding out she was in a relationship, the victim’s brother told The Post.

“The guy lived around the area,” he said of Reyes, “and he was always bringing lunch to her, and my sister is a friendly person to everybody, and he went out to her yesterday, bought her lunch” again, Raul Mass said on Thursday.

When Walker, who was dating Mass, also stopped by that afternoon, also to visit her on her lunch break, Reyes was obviously upset, and left in a huff on his bike, according to Raul.

“I think he didn’t know she had a boyfriend,” Raul said.

“Be careful with him,” Walker warned the doomed woman before leaving. “He’s looking at me strange,’” Raul recounted Walker saying.

Reyes left on his bike, before returning and shooting her with a gun stolen from a housing cop who retired in 1988, police sources alleged.

Walker apparently saw the shooting from his car, the Sonata.

Reyes is charged with second-degree murder, manslaughter, criminal use of a firearm and criminal possession of a weapon, according to police.

Walker was not charged for attacking the suspected killer.