We will fight! Putin’s failure in Ukraine ends ‘mirage’ of Russia’s invincibility in ex-So 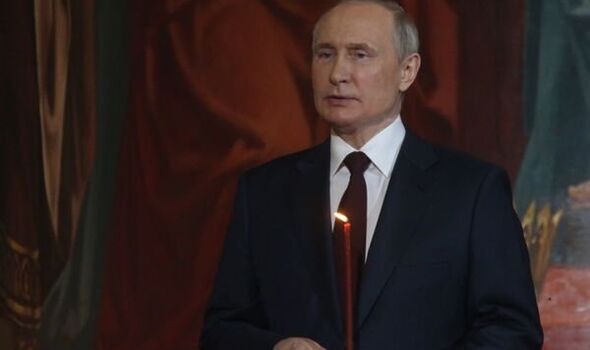 Russia’s military has performed woefully since the war began in late February as poor morale and equipment combined with Ukrainian forces putting up stiff resistance to cause havoc.
Before the war erupted, it was widely believed that Putin’s far superior forces would overwhelm the former Soviet state’s much smaller military in a matter of days.

When this didn’t happen, and Russian forces were successfully repelled in many areas, fears about the former Red Army’s invincibility quickly evaporated in Kazakstan, according to government advisor Sulushash Magzieva.

Speaking to Express.co.uk, she said: “The pictures speak for themselves as well as the numbers (of destroyed equipment and dead Russian soldiers).

“The marauding of Russian soldiers was disgusting to see. How is an army of such low ethics going to win?

“If the fighting gets tough then they might doubt if they are ready to risk their lives for getting more stuff. There is no motivation besides material or financial ones.

“In order to win there should be something bigger – an idea and a spirit.

“The Second World War was a different story. People were protecting their own homes and motherland.

“It was noticeable that they are trying to get back to the Soviet days by demonstrating their military power at parades.

“And it did look strong. It also looked strong when huge aeroplanes and soldiers and military equipment came to Almaty (in January to quell an uprising).

“During the war in Ukraine, I saw that Russia was positioning itself as the second strongest army in the world.

“I’m curious how they measured it and who was doing the ranking because the reality showed a completely different picture.

“I don’t want to tease Russia but the facts speak for themselves. It was a mirage which has evaporated.”

Russia has been hit with crippling sanctions since the increasingly-deranged president ordered 190,000 troops to invade Ukraine.

And while former Soviet state Belarus has actively backed Putin’s false claims to be ridding Ukraine of “Nazis”, the central Asian republic has taken a far more pragmatic approach.

Kazakh President Qasym-Zhomart Toqaev recently said that he “respected” Ukraine’s territorial sovereignty and has abided by US, EU and UK sanctions imposed on Russia.

The country’s media has also not shied away from calling the invasion a “war” and numerous pro-Ukrainian rallies have been held without a crackdown since the conflict erupted.

Last week it announced that it had cancelled the annual military parade to mark the Soviet Union’s victory over Nazi Germany during World War Two.

Timur Suleimenov, one of the president’s top advisors, also declared that Kazakhstan will “not be used as a tool to circumvent sanctions imposed on Russia by the US and EU”.

He spoke days after the Caspian oil pipeline – which passes through Russia and is one of the country’s key exports – was damaged.

Some observers claimed that Russia could be behind this as a warning to the country – something the Kremlin has firmly denied.

All this highlights how Kazakstan’s government is “very slowly and cautiously” moving toward the EU, according to Ms Magzieva.

She said: “We are closely economically connected with Russia within the Eurasian Economic Union so our economic borders are completely open with them

“So there was a risk that the sanctions may leak to Kazakhstan too. We don’t want that – we want to be an easy place to do business.

“We already have one of the most advanced online systems to open business and were rated highly by the World Bank in an ease of doing business rankings.”

She explained that her country is keen to keep this and continue to attract investment as well as being seen as an increasingly democratic and open country.

But, unlike Ukraine, its geographical position means that it shares a five-thousand-mile border with Putin’s federation and is still closely linked economically.

This is why it was “logical” that Russia was seen as a friendly country, Ms Magzieva said.

And while the country has always tried to maintain cordial relations, she believes that Putin and his Soviet-era cronies still believe that they “own” the former Soviet state.

A source close to the Kazakhstan government added: “It is very important for the EU and the US to support Kazakhstan in its neutral status and independent foreign policy.

“The West should help maintain Kazakhstan’s economic independence by supporting the course of political and economic modernization and attracting foreign investment.”