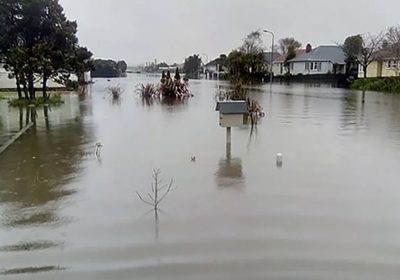 The flood-hit West Coast is bracing for a second wave of wet weather as many parts of the North Island are also told to watch for heavy rain.

MetService is forecasting a front will move across the country late on Wednesday and early Thursday bringing a brief burst of heavy northerly rain to western and northern areas.

The forecaster has issued a heavy rain watch for Buller and the ranges of Westland from 6pm today with 50mm to 70mm expected and thunderstorms possible.

A heavy rain watch is also in place for the Bay of Plenty ranges east of Opotiki and Gisborne north of Ruatoria as well as Mt Taranaki from later today to tomorrow morning. MetService is predicting rainfall amounts may approach warning criteria.

The rainfall may lead to more slips on the West Coast and Marlborough as the soil is still sodden from flooding on the weekend.

“People are advised to keep up to date with the latest forecasts in case parts of the Watch are upgraded or further areas are added,” a MetService spokesperson said.

Hundreds of people were forced from their homes when heavy rain caused flooding, closed major roads, submerged fields and prompted Buller and Marlborough to declare local states of emergency.

There were around 100 people still staying in three evacuation centres on Tuesday, including a school where people were camped out in classrooms.