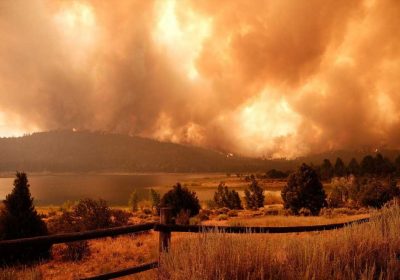 Smoke from raging wildfires out west and in Canada will likely mean hazy skies over the Big Apple on Tuesday, weather forecasts said.

Billows of smoke traveling as far as thousands of miles have already been visible over the Great Lakes region and will hit the I-95 corridor and the New York City metro region as early as sunset on Tuesday, Accuweather Senior Meteorologist Carl Erickson told The Post.

“What typically would have been just a nice sunny, blue-sky day is probably going to have that milky, hazy look to the sky,” he said. “It could be some rather beautiful, enhanced, vibrant sunsets tomorrow evening just because of that smoke.”

The flames of dozens of wildfires are torching acres of land — and the smoke clouds mean hazardous air conditions in neighboring states. But residents in the city and most of the northeast need not worry about air quality.

A cold front from the northwest is expected to roll through the area by Wednesday and clear out much of the atmosphere by the end of the week, according to accuweather.