Home » World News » Why is Boris Johnson going to India? PM to speak with Modi as MPs decide his future

Why is Boris Johnson going to India? PM to speak with Modi as MPs decide his future 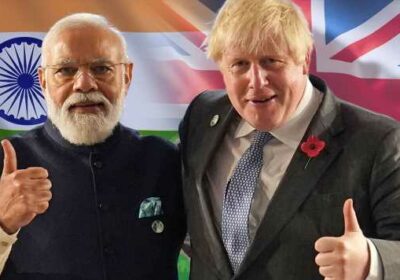 Esther McVey gives verdict on Keir versus Boris in PMQs

The Prime Minister has stumbled through life in office in recent months, dogged by the Partygate crisis, which came to a head last week. He received a fixed penalty notice, potentially the first of several, as the Metropolitan Police investigation found that he broke Covid rules by attending a gathering at Number 10. But as his party prepares to fight for him, he is scheduled to land in India.

Why is Boris Johnson going to India?

Despite rumours, the Prime Minister has not cancelled his trip to India this week and is due to land in the country on Thursday.

He will visit Gujarat and New Delhi over two days and speak with officials on matters of defence, energy security and trade.

The trip, previously twice postponed due to Covid, is designed to firm post-Brexit ties with India.

The first day of the engagement-light trip will see the Prime Minister visit his Indian counterpart Narendra Modi in Ahmedabad, Gujarat; the latter’s home state.

He will announce new joint ventures between the two countries, including partnerships in the health, science and technology sectors.

But while the meeting will aim to tighten relations with India, it will also see the Prime Minister take part in frank discussions over the war in Ukraine.

Mr Modi is among the few world leaders currently supporting the Putin regime, defying his western counterparts who have cut ties.

His country has historically leant on Russia for trade and hopes to keep a delicate balance in the Indo-Pacific region.

Officials believe that turning away from the country would see Putin turn to China, further emboldening the global power with which India shares a border.

Indian efforts to appease the Kremlin have come through the United Nations, where the country has refused to join others in voting to condemn the Russian assault in Ukraine.

While Mr Johnson is reportedly unlikely to try and persuade India to cut relations with Russia, he may float some western requests.

At the same time, they will want assurances that India won’t disrupt sanctions by offering to backfill Russia’s lost income.

Most importantly, western leaders have expressed a desire for Indian officials to rule out strategic alignment with the Eastern European aggressors.

The Prime Minister will likely want to use the trip to show his worthiness for office as Labour prepares to field a vote on his future.

On Tuesday, Speaker of the House of Commons Lindsay Hoyle greenlit a vote proposed by Labour and the Liberal Democrats on whether the lower chamber should refer Mr Johnson’s Partygate statements to the standards committee.

Opposition lawmakers believe that the Prime Minister’s comments stating that he followed Covid guidance at all times in Downing Street qualify as “misleading Parliament”, given that investigations have found the reverse to be true.

The Ministerial Code states this is a resigning offence for Government ministers, but determining an infraction to this extent would require the standards committee to investigate first.

The vote is due on Thursday as the Prime Minister lands in India.