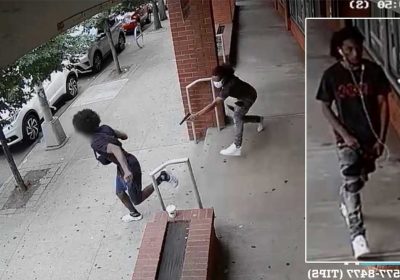 Wild video released by police Monday night shows a 16-year-old desperately trying to evade a Queens gunman before being shot in the right leg as he runs away.

The teen was blasted at close range by a male suspect during the confrontation outside of a 99 cent store on Merrick Boulevard near 111th Avenue in Jamaica on Sunday afternoon, according to footage released by the NYPD.

Before getting shot, the victim tried to shield himself behind a brick column, but the suspect, with a firearm in his right hand, kept chasing him around the structure.

The victim suffered non-life threatening injuries, but, according to sources, has not been cooperative with investigators.

The suspect was still being sought Monday night.

As of Sunday, shootings are up 28.9 percent citywide, NYPD data shows.