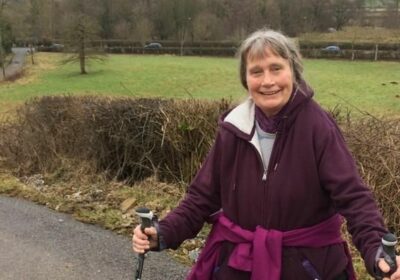 A woman who was left in a coma and hospitalised with broken ribs after a group of cows attacked her has opened up on the terrifying ordeal that also left her dog dead.

Pip Peacock, 63, was walking at Magpie Mine in Sheldon, Derbys., when she fell over as a single cow approached her, followed by several more that kicked her and rolled her over until brave onlookers intervened.

The retired teacher was injured so badly that she had to be airlifted to Northern General hospital in Sheffield by the Derbyshire, Leicestershire and Rutland Air Ambulance crew.

There, she was put into an induced coma for eight days and spent a further two weeks in hospital recovering from her injuries, The Mirror reported. Pip was left with 34 breaks in her ribs, a broken collar bone, broken shoulder ligaments, and a broken finger, as well as serious wounds to her left leg and right knee.

Pip said of the attack that happened in September 2019: "The first thing I recall about the attack is one cow coming for me. Then I was lying on the ground and was kicked and rolled over several times.

“I tried to shout for help but had no voice.

"I put my hands over my head and recited Psalm 23; ‘The Lord is my shepherd; I shall not want. He makes me lie down in green pastures.’ I felt very peaceful as my faith means I am not afraid of death.

"Suddenly, I heard voices and two men and a woman came along. The men were incredibly brave and chased the cows away.

"This was no easy task. I could hear them shouting and was worried the cows would attack them.

"They used their sticks and camera tripods to move the cows away. The woman stayed and talked to me."

Cows have killed 74 people in the last 15 years in the UK, data has shown.

Pip, who lives with 17 titanium plates now holding her rib cage together, is now raising money for the Air Ambulance charity that saved her life.

She set herself the challenge of walking 1,000 miles in a year, to raise vital funds for the Derbyshire, Leicestershire, and Rutland Air Ambulance – which flew to her rescue.

For the latest breaking news stories and incredible tales from the Daily Star, sign up for our newsletter by clicking here.