Washington: Two years ago, an 18-year-old was allegedly gang-raped at the Running of the Bulls festival in Spain.

One night, the woman told police, five men in their mid-20s offered to walk her to her car. But instead of accompanying her to the vehicle, they pinned her against a wall, told her to "shut up," then took turns sexually assaulting her. One man even stole her phone before they left, she alleged. 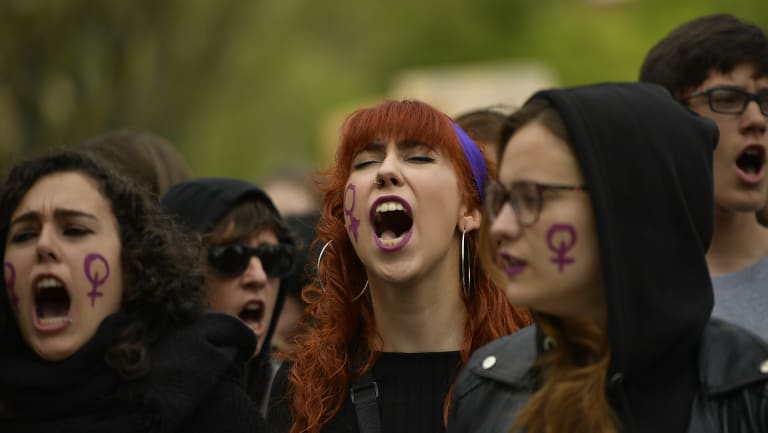 The woman was later found curled in a fetal position, crying in "a distraught state." She went to the police, who made arrests the next day.

The subsequent trial in what has been called the "Wolf Pack" case, named for a WhatsApp group of which the defendants were members, consumed Spain's attention for nearly two years.

Much of the trial revolved around short videos the defendants took of the woman during the attack. In the clips, the woman is seen in a "passive, submissive stance," with her eyes closed. The men's attorneys said this was evidence that she'd consented.

They also pointed to a report compiled by a private investigator who secretly followed the victim in the days after the incident. He took pictures of her smiling and laughing with friends – evidence, the defence team said, that the woman had not been traumatised. 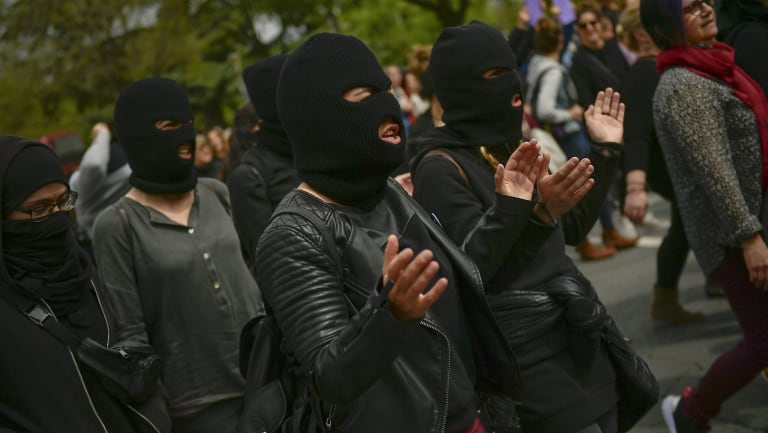 The woman's attorneys pushed back against the idea that she had offered her "consent."

"The defendants want us to believe that on that night they met an 18-year-old girl, living a normal life, who, after 20 minutes of conversation with people she didn't know, agreed to group sex involving every type of penetration, sometimes simultaneously, without using a condom," prosecutor Elena Sarasate said, according to the Guardian.

The judge did not allow the jury to consider the WhatsApp chats among the men, who texted "us five are f—ing one girl" and "there is video" shortly after the attack. In other chats, the men joked about drugging women, then raping them. One even shared video of one of the men assaulting another woman, who appeared unconscious.

On Thursday, the men were acquitted of sexual assault, a charge that includes rape. They were found guilty, instead, of the lesser charge of "sexual abuse" and sentenced to nine years in prison. (The woman's attorneys had sought 22 years.) Each man must also pay the woman about $US12,000 ($15,830). 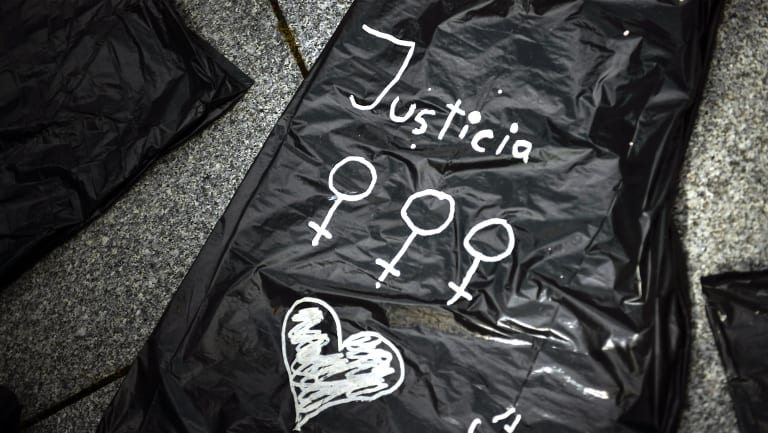 A plastic black bag painted with the word, ”Justice” during a protest against sexual abuse in Pamplona, northern Spain.

That is not nearly enough for many in Spain.

In the wake of the verdict, tens of thousands of people have taken to the streets in protest.

Holding signs declaring, "It's not sexual abuse, it's rape," activists rallied in Madrid, Barcelona, Valencia Pamplona and Alicante. An online petition calling for the disqualification of the trial's judges has gathered more than 1.2 million signatures.

State prosecutors say that they will appeal the ruling.

Even Spain's national police force came out strongly for the woman, tweeting "No is no" a dozen times shortly after the verdict.

On Saturday, an association of Spanish judges issued a statement calling for the resignation of Rafael Catalá, the Spanish justice minister, for making "unacceptable declarations" that they said undermined the independence of the judiciary.

Catalá initially called for "respect toward legal sentences," but following the protests, he questioned the handling of the case.

After Thursday's verdict, the Spanish government said it planned to review how sex assault is defined in Spain's criminal code, which dates from 1995. "Spain has changed in many ways since then," Catalá told Cadena Ser, a radio station.

The justice minister urged Spain's judicial watchdog to review the stance of one of the three judges who ruled in Pamplona, after he called for the five men to be absolved.

But the head of that watchdog group, Carlos Lesmes, a justice on the Supreme Court, rejected such criticism as an unjustified attempt to discredit the judiciary.

When the criticism comes from people "who hold public responsibilities," he said, "that seriously undermines the trust that our judicial system deserves to receive from citizens."

Meanwhile, politicians have promised to rethink Spain's laws on sexual violence. Right now, a victim must prove that a perpetrator was violent or intimidating to gain a rape conviction. Many women's rights activists say that sets the bar too high.

An editorial in the newspaper El Pais noted that violence or intimidation can be hard for survivors to prove. It "leads to the painful question of just how much a person needs to fight to avoid being raped without risking getting killed, and still get recognised as a victim of a serious attack against sexual freedom while ensuring that the perpetrators do not enjoy impunity," the newspaper said, according to a translation by Agence France-Presse.

"The government has been, is and always will be with the victims," Íñigo Méndez de Vigo, a spokesman for the government, told reporters.

Sexual assaults have plagued the Running of the Bulls festival. Women routinely report being groped, or worse. At the 2015 festival, a British woman was allegedly assaulted by a group of men in a bathroom.