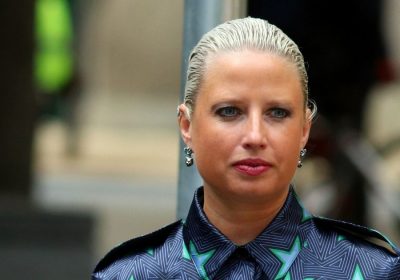 A conwoman scammed art dealers and investors of £1m to fund her lavish lifestyle after her husband was cut off from his billionaire oil tycoon father, a court heard.

Angela Gulbenkian, 40, is facing up to six years in prison after admitting stealing £982,308.29 given to her to buy the sought-after 'Kusama pumpkin' by Japanese artist Yayoi Kusama.

She also admitted a second theft of £50,000 she had promised to invest for her masseuse.

Southwark Crown Court German-born Gulbenkian, who was living in south London at the time, spent the stolen money on the 'lavish lifestyle' she used to enjoy with her husband.

An analysis of her bank account after the money was paid found she spent £25,000 on a Rolex watch and £121,000 in travel costs including on a private chartered jet.

Gulbenkian is married to Duarte Gulbenkian the great-grand-nephew of oil tycoon Calouste Gulbenkian, whose fortune funded a multi-billion pound foundation and museum in Lisbon, Portugal.

But he had become unhappy working in the family business and left, the court heard.

However, her father-in-law took this as a "personal slight" and cut off his son, including selling their London home from "underneath their feet".

David Groome, defending, said: "Her husband worked in the family business and as a result of that they enjoyed an extremely lavish lifestyle.

"Shortly before events that feature in count one, the defendant's husband became dissatisfied with working in the oil and gas business.

"He became unhappy and he left the family business. It caused what has been described by the defendant as an enormous unimaginable rift between his father and his husband, with her father-in-law taking some sort of personal slight.

"His son was cut off and their home which was owned by the oil and gas company was sold from under their feet.

"Virtually overnight Mrs Gulbenkian was responsible as the sole source for their family income.

"She worked tirelessly trying to create legitimate artwork deals. She always enjoyed a good relationship with her father-in-law and was also trying to effect a reconciliation between her husband and his father."

Groome told the court his client had "the best and honest intentions" when she set up a deal for the sculpture.

He said: "The temptation was just too great and she turned to dishonestly using those funds to support the type of lifestyle she and her husband had previously enjoyed."

The court heard Gulbenkian spent months offering excuses to Art Incorporated as to why the sculpture could not be delivered, including that it needed restoration work and it had been held up at customs.

Gulbenkian also claimed the sculpture was owned by Wolfgang Porsche, a member of the family that controls the Porsche car company, and that the dynasty were "hard to work with".

But during a civil suit brought by Art Incorporated at the High Court in 2018, Gulbenkianthen claimed the artwork was actually owned by the former CEO of Volkswagen, Martin Winterkorn.