Acting can be serious business, but underneath it is joyfulness and a love of storytelling, says Melbourne performer Daniela Farinacci.

And who better to tap into a sense of playfulness than children?

Ms Farinacci is perhaps best known for her roles in films Lantana and Look Both Ways, but found fulfilment teaching and mentoring at her local school.

“Never in my wildest dreams would I expect it would be such a valuable experience,” she said of her time at Footscray City Primary School in 2018. 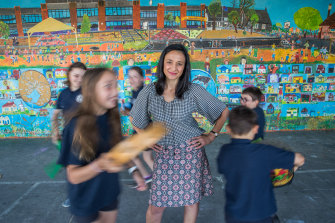 Performer Daniella Farinacci says working at Footscray City Primary was a mind-blowing experience and urges other creative professionals to give schools a go. Credit:Jason South

“I came away with a deep respect and regard for those teachers and how hard they work.

“I had some wonderful moments of breaking through to individuals who … perhaps hadn’t had any experience of theatre, let alone theatre-making.”

Ms Farinacci wrote and directed eight pieces of theatre for the school’s 400 students, which were performed at a family event called The Big Day Out.

"The families who came to the performance might have been really surprised by what they saw their child is capable of," she said.

"I often got feedback from classroom teachers that there were some students who showed a very different side of themselves." 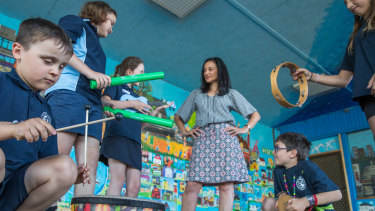 The Andrews government is investing $8.6 million to put creative professionals – such as performers, artists, designers, musicians, filmmakers and writers – in government schools next year.

The creative professionals will work full-time for six months, teaching and mentoring students from prep to year 10.

A government spokesman said more than 150 full-time equivalent jobs would be created, with creative professionals ranging from animators to choreographers and filmmakers encouraged to apply.

"The Creative Workers in Schools program has been developed to offer new learning experiences to students and teachers in 2021, while providing new employment opportunities to Victorians in the creative industries," he said.

Ms Farinacci said the money was good news for artists who had been hit hard by the COVID-19 pandemic and recession, as well as students who had endured months of learning at home and the loss of many fun activities.

"A lot of creatives slipped through the cracks in terms of JobKeeper and it's such a good thing for the artists to be able to get their teeth stuck into a project that has a longer life, but also for the students who have been starved of anything for a while," she said.

The actress said her experience at Footscray City Primary, while daunting at first, had led to greater opportunities and confidence in directing.

"I teach quite frequently now at Brave Studios, which is in Footscray, and also [Victorian] College of the Arts acting students and I link the fact I can do that directly to this experience," Ms Farinacci said.

“All too often with funding announcements the Andrews Labor government forgets about Victorian students living beyond the tram lines," she said.