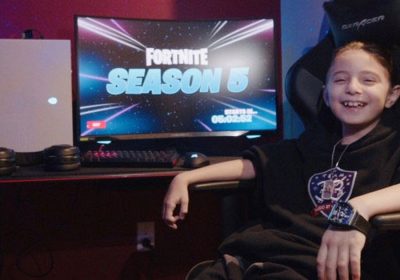 An eight-year-old schoolboy has raked in some serious pocket money after being signed as a professional Fortnite player.

Joseph Deen from California made a whopping $33,000 (£23,600) for signing with esports Team 33 in December, making him one of the billion-dollar company's youngest players.

Survival game, Fortnite, in which 100 players fight against each other online to be the last one standing is played by hundreds of millions of players around the world.

Joseph, who is also a dab hand on the piano, was invited to the company's headquarters to collect the $33,000 (£23k) signing on bonus and a high-speed computer system, the BBC reports.

He said: "I've thought about being a professional gamer a lot, but no-one took me seriously until Team 33 came along."

The whizz kid has been playing the popular video game since the age of four, but his skills weren't spotted by Team 33 until around 18 months ago.

Tyler Gallagher, Team 33's chief executive and co-founder told the BBC one of his scouts found him and said he was "insanely good".

Joseph's mother Gigi said she lets him play Fortnite for two or three hours a day after school and more at the weekends.

Fortnite first came out in 2017 and is rated PEGI 12 or ESRB "teen" certification for frequent mild violence.

Gigi says she isn't worried by this and lets her son play the game for two or three hours a day after school, and more at weekends.

"I've looked at the game and I don't think we're doing anything wrong. He's a balanced child and comes from a good family and he's not affected by it," she said.

Gigi added that Joseph's bonus has been put into a savings account for when he's older.

Lockdown has reportedly seen Brit parents turn to gaming in a bid to connect with their kids.

A study of the last year's habits has found mums and dads picking up the Playstation and X-box controllers in a bid to feel better connected to their children.

A study of 2,000 mums and dads found six in 10 have enjoyed gaming sessions with their children, playing the likes of Fortnite and FIFA – becoming closer as a result.