Home » You're on littercam! A high-tech way to catch culprits 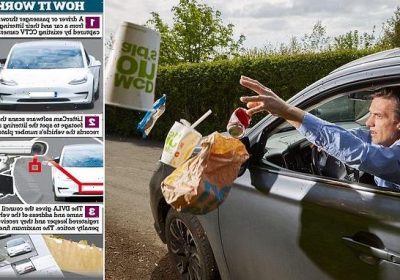 Look out, louts – you’re on littercam! Rubbish thrown from vehicles spoils our countryside and costs £850m a year to clean up. Now there’s a high-tech way to catch the culprits red-handed

Heart pounding, sweaty hands gripping the steering wheel, I drove as nonchalantly as I could down the quiet country lane, all the while glancing nervously in the rear-view mirror to ensure no one was behind me.

Then, with the coast clear, I did something I have never done before — I lowered the window and threw out the packaging from a takeaway meal.

Looking back as I drove off, I saw an empty drink cup bounce on the road a couple of times before settling into the grassy verge. A greasy chip carton landed nearby.

And just like that I had joined the selfish band of UK drivers who think nothing of littering our beautiful countryside. Not for them the ‘imposition’ of taking their rubbish home or pulling into a service station to find a bin.

While it takes them just a moment to hurl the offending items on to the grass verge, it costs councils an estimated £850 million a year to clean up their mess. And it’s not just a waste of taxpayers’ money.

A recent survey by environmental charity Keep Britain Tidy found that as many as 3.2 million voles, shrews and mice die when they crawl into discarded bottles and cans and find they cannot escape. Meanwhile, the RSPCA has to deal with a call about an animal killed or injured by litter every two hours. 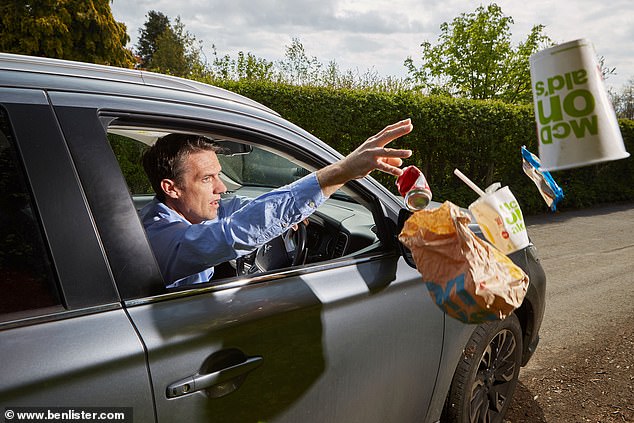 Why, you might wonder, would I want to join the ranks of such thoughtless individuals?

I don’t. But I do want to be part of the solution, which is why I found myself helping to test the new ‘smart’ roadside cameras that can identify any car the moment litter is thrown out of its windows.

Called LitterCam, the system is so sensitive it can pick up items as small as cigarette butts and is even capable of monitoring cars travelling at motorway speeds.

Offenders can then be hit with a fine of up to £150. This matters because, without this kind of technology, the chance of getting caught and fined is minuscule. The fact that one in seven drivers admits to throwing rubbish out of their cars is because they know they can get away with it. Figures obtained by environmental campaigners show that littering is going unpunished by a majority of councils, with more than half issuing less than one fine a week.

But, crucially, new legislation means that it is easier than ever for councils to target the rule-breakers: the registered keeper of the vehicle is now responsible for the offence — there is no longer any need to identify who in the car actually threw out the rubbish.

Combined with the new technology that allows existing roadside cameras automatically to record littering, it’s clear a new front in the war on rubbish is opening up.

Maidstone Borough Council in Kent is trialling the technology and believes it will see the 200-odd fixed-penalty fines its wardens issue in person each year increase to the ‘thousands’. Other councils across the country are also in talks to follow its lead.

‘We think that using cameras to detect littering from vehicles is a vital next step in the fight to eradicate littering,’ said Allison Ogden-Newton, chief executive of Keep Britain Tidy.

The charity, with the support of the Mail, is encouraging people to take part in the Great British Spring Clean 2021, a litter-picking event between May 28 and June 13.

Allison adds: ‘Fines are only a deterrent if there is a genuine risk of being caught, and cameras can be everywhere, so digital technology has a real role to play in making would-be litterers think twice before winding down the window and chucking out their rubbish.’

Which brings us back to my efforts last weekend to put the new technology to the test. With a photographer recording my nefarious activities using a video camera mounted on a tripod at the roadside, I threw a range of items out of my car window as I drove along at speeds of up to 30mph.

The items included McDonald’s cups and burger boxes, empty drink cans and crisp packets. Then, parked up, I also filmed myself dropping a number of cigarette butts from the car. By number, cigarette stubs account for two-thirds of all litter. (It goes without saying that, as soon I had finished filming, I immediately retrieved and properly disposed of all the rubbish.)

Next, the video was sent to the company behind LitterCam who, as I watched, ran it through software developed using artificial intelligence.

It automatically pinpoints any objects coming out of the car, electronically tracking the arc of each item as it falls to the ground. They are highlighted within a red ‘box’ that appears on the screen.

It worked seamlessly with every item I discarded — everything from burger boxes to fag butts were identified.

The same process will happen when the system goes live in Maidstone next month. Except it will use footage being recorded around the clock by a battery of CCTV cameras which already routinely monitor major routes in and out of the town.

If the LitterCam software detects a littering offence, it will automatically flag up the snippet of footage to the council. It will check it to see that the offence and the number plate is clear, after which details of the car’s registered keeper will be obtained from the DVLA.

A fine plus a link to the offending footage will then be sent to them. In Maidstone, fines will begin at £90 and rise to £120 if unpaid after 15 days. But the maximum on-the-spot penalty for littering in England is £150.

Andrew Kemp, the 46-year-old entrepreneur behind LitterCam, says he is in advanced talks with other councils in Kent, Essex, East Sussex and Manchester about introducing the technology. Interest has also been shown in Scotland and Wales.

He explains how he came up with the idea in the autumn of 2016, as the leaves started to fall off the hedgerows in the rural village where he lives in West Yorkshire, revealing piles of litter.

Speaking to his local council, he asked why more people weren’t being prosecuted for the offence. He was told that getting footage with good enough evidence was expensive and time-consuming.

Traditionally, councils have tackled sites prone to fly-tipping with the installation of hidden CCTV cameras. But even then, all the footage has to be manually reviewed to catch any offenders. The beauty of LitterCam is that it works with footage from existing networks of cameras.

‘If you take a London authority, some will have 800 to 900 cameras, some will have up to 4,000,’ says Mr Kemp. ‘They may select a subset of, say, 50 they want to work with, and we will provide a server to analyse those relevant CCTV streams.

‘If there is no coverage, then a camera can just be fitted to a lamp-post. The idea is to make it as cost-effective as possible. This isn’t about making money, it’s about doing something that’s right and forcing behavioural change.

‘People who litter, their set of values is wildly different to those who want to see a litter-free society.’

Discussions are also under way with Highways England, which is responsible for litter collection on motorways and some trunk roads. And former Environment Secretary Theresa Villiers recently suggested that police traffic cameras could be also used to catch littering motorists.

‘Not long ago, the Government changed the law so that if prosecutors show that litter was thrown from a vehicle, they can fine the owner and do not have to prove the identity of the person in the car at the time,’ she says. ‘This important legal change should open the way for widespread use of LitterCams. Deploying the national automatic number plate recognition (ANPR) network on this task could make a big impact on cracking down on litter offences.’

The ANPR network, which has 11,000 cameras around the country, is used to monitor vehicles, including tracking stolen cars and movements by criminals.

The Government says that the cameras are set up to focus on number plates, but Mr Kemp and Ms Villiers believe there is the potential to use them.

‘Why not adapt and upgrade these cameras so they capture images that can be used to fine people who throw rubbish out of cars?’ says Ms Villiers. ‘The state of the roadside shows it is often drivers and their passengers who are responsible for litter.’

Of course, only time will tell how successful the cameras prove to be. In the meantime, the Mail’s army of litter pickers will doubtless be kept busy clearing the nation’s verges. A depressing task, particularly given the fact that certain items, such as takeaway waste, predominates.

One idea that’s been suggested to tackle this particular aspect of the problem is to make fast-food restaurants take the registration number of a customer’s car when an order is placed.

When they collect their food, the packaging would be marked with these details. Anyone who failed to dispose of the packaging properly could then easily be traced.

A new petition on the website change.org calling for the introduction of this type of labelling has now been signed by more than 60,000 people.

It reads: ‘We are proposing the idea of three to four stickers around the size of the bottom of the restaurant’s cup, printed with date/time and car registration, placed on to the bottom of the bags, cups and boxes making it difficult and time-consuming for litterers to remove their details without spilling the remaining contents of salt, fluids etc into their cars/vans.

‘The restaurants’ CCTV will back up this evidence with pictures of the driver and vehicle to provide solid evidence that they were the purchaser.’

Asked about the possibility of doing this, McDonald’s declined to comment to the Mail. But the chain has previously made the point that it produces ‘packaging, not litter’ and that it carries ‘clear instructions’ as to how to dispose of and recycle it.

Instructions that a small minority of the British public steadfastly refuses to follow. But technology — and a hit to the wallets of those caught red-handed — might finally be about to change that. 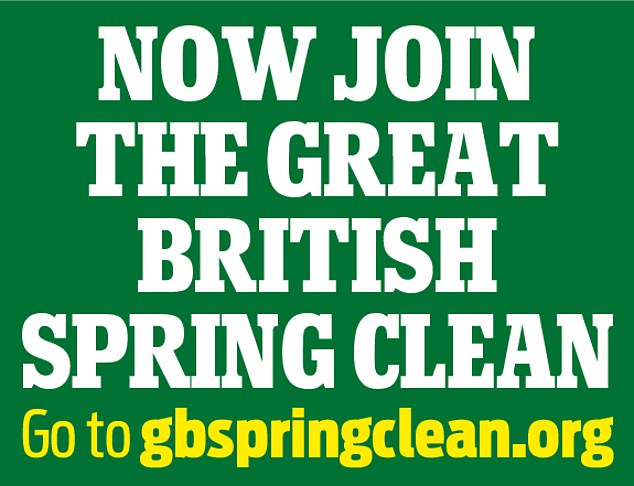